You may know masala milk tea also under the name masala chai or chai latte. It originates of course from India. But for me, it is inextricably linked to Nepal. Due to the many hikes we did on vacation over there. We love to visit local people and they serve us most often their masala milk tea. The main ingredients are milk, tea and spices. But everyone has their own recipe to combine them to taste. Below you will find a standard recipe with which you can get started. Later in this article we will also discuss history and variants in more detail. And the surprising popularization of chai latte in our Western world. And you also learn about tea and chai, and the (in)existing differences between them. 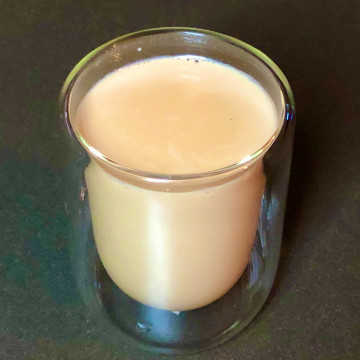 A classic masala milk tea, as spiced chai is called in the Nepali Himalaya, consists of half milk and half tea. And spices of course. But in the mountains the milk is often replaced by milk powder.

But of course the herbs and the black tea give their unique taste to masala milk tea. If you can, try to use fresh herbs. But otherwise dried and grounded variants will also do. Crush the non grounded herbs in the mortar. You don’t have to ground them completely. But by crushing them a bit they will give optimal flavors to this spiced chai. What can go into the mortar? Well, think of peppercorns, cloves, star anise, cinnamon sticks, coriander seeds. Fresh ginger is also a must in a spicy chai latte. Just like the pepper it gives a tingling spicy taste. It is best to cut the fresh ginger into small pieces.

Now bring the water to a boil and mix in the tea and all the herbs. Let this boil for a few minutes, so that the tea base gets its taste. Then add the milk and sugar and let it warm and reduce for a few minutes.

Now of course we have tea with a lot of chunks in it. And we don't really want those chunks in our mouths. That is why it is best to pour the spicy Nepalese milk tea through a sieve before serving it. Or if you want to store it, otherwise the taste of the herbs will become too strong and dominant. You most probably know how your tea tastes when you forget to take the teabag out.

Of course, there are many many other recipes for masala milk tea that you can find. As mentioned, there are almost as many recipes as people who make the tea. And those variations go from sweeter to spicier. But based on this recipe, get started yourself and create your own perfect masala milk tea! We'd love to read it in the comments.

The history behind masala milk tea

Let us start with the tea

Before we dive deeper into the history of masala milk tea, let us first talk about the tea itself. Or shall I say chai? Or does it depend?

The words tea and chai both originate from Chinese. And in Chinese writing, both are depicted with the same character. The difference lies in the pronunciation. In the Mandarin variant it is pronounced chá. In the coastal regions, however, a different variant is spoken, let's call it a different dialect. And there people pronounce the character like té. And it is the export region that determines the pronunciation worldwide! The regions that were supplied by land use the word chai, or a variant of it. Over sea, it was exported as té, and became tea or similar. In the article “Tea if by sea, cha if by land: why the world knows only two words for tea” you can read this and also check it visually on a map.

The origin of masala milk tea

But at some point, China reduced its tea exports. The British therefore desperately started looking for an alternative to drink their beloved drink. This is how they ended up in Assam, in the north east of their colony of India. There, the conditions and climate best matched the origin in China. And so the first tea plantations in India came into existence in 1838.

But yield and quality were not comparable to the original from China. Nevertheless, the tea was promoted and mixed with spices and milk, and so a new product was created: masala chai, spiced tea. It became a typical street product (street food) that was sold by street vendors (chaiwallahs). The milk and the spices also covered the lower quality of the tea. Nowadays, it is as widespread in India and Nepal as coffee is here.

Popularisation in the Western world

And in the meantime, this spicy Nepalese milk tea also made its way to the Western world. It is perhaps best known under the name chai latte. And you are not going to believe it, but it is Starbucks, the American coffee giant, that helped a lot in popularising “chai-tea” with us. Adapted to our taste of course, much more sweet than spicy. But it caught on, which is why today more and more coffee houses and restaurants are offering some form of chai latte as a hot drink. An alternative to our classic coffee and tea.

You may find more background information in the following articles:

Thanks to my numerous vacations in Nepal I also learned to appreciate a lot Nepali kitchen. Quenched between India and Tibet it has a lot of influences of both regions.