Spätzle (spaetzle) is a pasta from the southern part of Germany. More specifically the region of Baden Württemberg. Probably you know from like Mannheim, Stuttgart and Freiburg, or the Black Forest. Käsespätzle can be described as the German Mac&cheese. This German pasta is loaded with cheese and caramelized onions. Below the recipe you will find much more information about alternative preparation methods and variants. 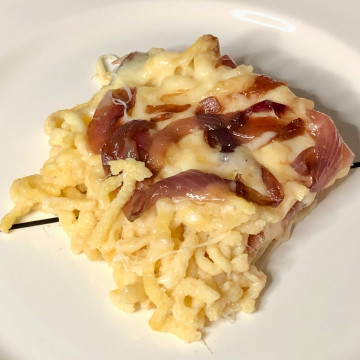 For the caramelized onions

About Käsespätzle - The German Mac&cheese

The Oscar for the best supporting role in this recipe goes to the caramelized onion. Onion is ubiquitous in German cuisine. And together with the melted cheese it brings the unique flavor to this German Mac&cheese.

To caramelize the onions you need to take some time. Basically it is a slow cooking procedure. So it is best to start with them when making Käsespätzle with caramelized onions. We remove the skin from the onion and then roughly chop it. Then fry them for a few minutes with some butter in a pot. Make sure it doesn't burn. After about five minutes, reduce the heat and put the lid on the pot. Now the onion can simmer for half an hour. Stir it regularly to avoid burning.

The large pieces of onion will now slowly lose their moisture and take on a sweet taste. It is important that they do not burn. Because in that case they turn bitter. That is also the reason why you should not cut the onion too fine. Then the risk is too great that the pieces will burn quickly. And we really don't want this Today.

The dough for the German Spätzle

The dough for the German Spätzle is very simple to make. It actually consists of only two main ingredients: flour and eggs. If necessary, add some flavor carriers (for example, salt) and some water to get the right consistency. But that's it.

The big difference with (Italian) pasta dough is that the dough for Spätzle is much moister. You are not going to knead this or process it with the rolling pin or a pasta machine. The dough is much too moist for that. Actually, we only stir the dough until it has an elastic consistency.

How to press the Spätzle

But now comes the challenging part: how to make Spätzle out of the dough. Ideally, you have the right utensils: a puree press or a Spätzle press. If you have that, it is really easy to press to dough into Spätzle.

But what if you don't have such a press? Aren't there alternative ways to press the Spätzle? Fortunately, yes! You can also use a colander or a strainer. And push the dough through the holes. Finally, there are also Spatula graters or Spatula planes. This is like a cheese slicer or a coarse grater. However, I find this the more difficult option.

You may read more about the different devices with their advantages and disadvantages in the following articles:

Now we have to press the dough above the boiling water. If the dough falls into the boiling water, it will sink to the bottom first. But after one or two minutes it floats to the surface. Then it is cooked and you can scoop out the Spätzle. Repeat until you have used all the dough.

You don't want to make the dough yourself? Some supermarkets also sell these, in addition to all Italian pasta types. Or order them via the world wide web.

Finishing the Käsespätzle with caramelized onions in the oven

Now we need to bring all the main ingredients together... Lightly grease a baking dish, then layer the Spätzle, the onion and the grated cheese. You can add some extra seasoning if you want. After that our German style Mac&cheese with caramelized onions goes in the oven. So that all the ingredients get warm and integrate. the cheese will melt and it may also start to crust slightly on top.

Finally, we scoop the warm Käsespätzle onto plates. You can finish it with some greens, such as chives or parsley. And maybe serve with a salad. This South German family meal is accompanied by a glass of (German) wheat beer.

Variations on Käsespätzle - the German Mac&cheese

My father loves vegetarian food, with some meat. Do you also belong to this category? No problem. Just fry some bacon strips briefly in a pan and spread them over the layers.

Instead of caramelizing the onion, you can also bake or deep-fry it. That's actually quite the opposite taste experience, the crunchy one. To do this, cut finer rings and sprinkle them with some flour. This makes the fried/fried onions extra crispy.

Another alternative is to bake the Käsespätzle in the pan. Then use some butter and mix in the grated cheese and the onion.

You want to learn more about Spätzle? Then you might check these ressources:

German cuisine can be very surprising. It is also very varied with large regional differences. Here are some more recipes inspired by German cuisine: