Most probably mayonnaise does not need any kind of introduction. This emulsion of eggs and oil is just about the most famous sauce in Western cuisine. We did already explain in detail where the famous white sauce originates from, in the article “Mahonaise, the origin of mayonnaise”. Today we integrate a well-known element from Japanese cuisine in our mayo: wasabi. The result: a tasty, slightly more runny wasabi-ginger mayonnaise with the fine accents of wasabi and ginger in the background. After the recipe you can read how you can vary with the seasoning. And we will also briefly explain what wasabi is, and whether that green spicy sauce with the sushi is really wasabi. 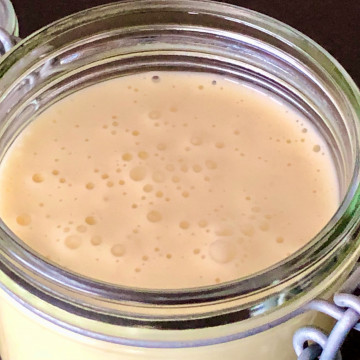 For this wasabi-ginger mayonnaise we used wasabi paste and pickled ginger. Undoubtedly you know both as a side with sushi.

The amounts in the recipe give a pleasant background taste, without being overpowering or spicy. But of course everyone has a different sensitivity regarding spiciness. Are you afraid that this will become too spicy? Then first make the mayonnaise without the wasabi and ginger. And only then mix in the spicier elements later on. In that case, it is also better to use ginger powder or rasped ginger because the slices no longer go through the mixer.

As an alternative to the pickled ginger, you can also use powdered ginger spices or grated fresh ginger. Maybe you already have those at home. And you don’t have to buy a jar of pickled ginger slices especially for this mayonnaise… Although, with sushi, those ginger slices are often used up first. If you like it, it can also be a good reason to buy a jar for the mayonnaise, … and then enjoy the rest yourself.

Fresh wasabi is hard to find and also expensive. You can read more about this later in this article. But first, let's figure out what wasabi actually is.

Wasabi paste is made from the root of the wasabi plant. In the wild, this plant only grows in Japan and the Russian island of Sakhalin. It is therefore typical of Japanese cuisine, and hence the association with sushi.

Nowadays, the plant is of course also grown commercially in many Asian countries, but also in Iceland, the United Kingdom and even in the Netherlands. Because the plant needs a high and constant humidity, the cultivation usually takes place in greenhouses.

The wasabi belongs to the same family as, for example, the horseradish. But it is a horseradish with a manual. Wasabi is not easy to grow and grows also quite slowly. As a result, it is much more expensive. And that means that what you think is wasabi is most often a cheaper alternative.

Read more about wasabi in the following articles:

But is that green paste really wasabi?

Asking the question is of course also answering it. In most cases, that green paste you eat with your sushi was stored next to wasabi at its best. We did already explain that the wasabi plant is like a horseradish with a manual. The plant is grows only very limited in the wild and cultivation is not so easy. As a consequence, it is expensive. And in those cases the food industry of course gets creative and searches for cheaper alternatives that still generate the association with wasabi. And alternative solution is called horseradish.

Since I know this I actually taste horseradish whenever I eat wasabi. And I just checked the packaging of my wasabi paste. The “wasabi paste” I used contains 24% horseradish and 1.6% wasabi. Often mustard and radish are additionally used to create the typical taste. Although the package says Wasabi in bulk, the title of the ingredients is “horseradish paste with wasabi”. Which, of course, is much closer to reality than wasabi.

What can you eat wasabi-ginger mayonnaise with?

The easiest answer to the question “What can you eat wasabi ginger mayonnaise with?” Is, of course, “everything where you would otherwise eat mayonnaise.” It is a mayonnaise with a surprising seasoning: wasabi and ginger. But as said before, they don't claim the leading role. They are not dominant, certainly not in the indicated quantities.

But now that we know that we actually eat horseradish, all recipes that we traditionally eat with horseradish also qualify for this exotic mayo with wasabi and ginger. Like for example fish and especially salmon. You may find a lot more inspiration for ideas horseradish in these articles:

And here you can find some surprising.recipes to eat your wasabi-ginger mayonnaise: