This easy red lentil soup with chorizo is the perfect comfort meal after a cold winter day outdoors. A soup that gives energy. A hearty soup you can stand your spoon in, so to say.

We published this winter soup for the first time on January 26, 2009 on the first predecessor of gerechtenweb, the Dutch version of surprising.recipes. It even ranked in the top 10 most popular recipes from 2012 to 2016. Even being number one for two consecutive years. So we urgently needed to share this with the English speaking part of the world!

We'll start with the recipe. But later in this article you can read why this lentil soup is inextricably linked to the Feldberg in the Black Forest. And the most memorable come back in football during Antwerp – Vitosha Sofia on September 29, 1989. 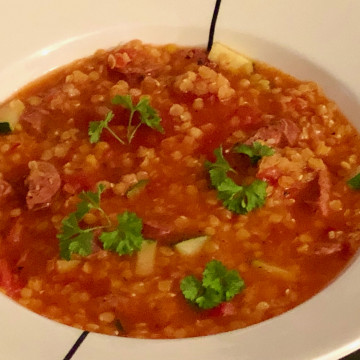 Bake the chorizo and the zucchini

How to make the best red lentil soup with chorizo?

Which lentils should you use?

I am a fan of red lentils. And certainly for this soup because the color goes well with the red of the chorizo. But you can of course also use other types of lentils to make this winter soup. Just keep in mind that you may have to adjust the amount of liquid and the cooking time, depending on which type of lentils you use. Be sure to check the directions on the packaging.

Brown lentils are the most common. They have a mild earthy flavor and are great for stews. The cooking time is approximately 20-30 minutes.

Green lentils are larger and firm in texture. They therefore have to cook longer, up to 45 minutes.

Red (yellow and orange) lentils have been stripped of their skins and therefore have to cook less long. They will be ready after 15-20 minutes. They are a bit sweeter and nutty in taste. Ideal for soups and curries because they also bind well.

In addition there are a lot more lentil types like Beluga lentils, Puy lentils and many others. You can learn much more about lentils in the following articles:

The seasoning of this simple red lentil soup with chorizo

As you can see in the recipe, we didn't use the classic seasonings of salt and pepper. This is not necessary because the chorizo sausage has already been seasoned so intensively. The red chili pepper and garlic are not necessary per se, but I really like them. I love to use them, even more than salt and pepper. But if you are not into them, you can leave them out. Everybody has a different taste.

Where do lentils come from?

Lentils are legumes that are grown in many parts of the world. Man has been cultivating them for many thousands of years. Even in the Old Testament they are mentioned when someone sells their birthright for a bowl of lentil soup. Lentils are also a staple food in Asia. For example in India and Nepal. From my own experience I know that many porters in Nepal eat almost nothing else than Dal Bath: rice with lentil soup.

The connection between the red lentil soup with chorizo, the "Feldberg" in the Black Forest and the miracle of Vitosha Sofia?

The "Feldberg" is the highest mountain of the Black Forest in Germany. And it is there that I ate a red lentil soup with chorizo that I will never forget. On a cold snow-rainy day, after a few hours on the slopes, we were in dire need of a warm resting place and inner strengthening. So we entered a ski hut and ordered a hearty winter soup to warm up again.

We spent the rest of the week warming up in that hut every day. Me with a smile from here to Tokyo, on which our Bulgarian always stammered his mantra “dramatisches Fussballspiel”.

The miracle of Vitosha Sofia

Dramatic or fantastic, they are two different views of the same football match. In this case the European Cup match between Antwerp and Vitosha Sofia on September 26, 1989. The first leg in Sofia had ended 0-0. The return leg took place on September 26 on the holy ground of the “Bosuil” stadium in Antwerp. It would be an evening full of drama and heart attacks.

The first damper came after only 6 minutes when Vitosha Sofia scores 0-1. Meaning that Antwerp has to score at least twice at that moment to qualify for the next round. No change at half time, still a 0-1 lead for Vitosha. During the break Antwerp makes one replacement, the German Ralf Geilenkirchen comes on the field. For the youngsters among us: in those days only two replacements were allowed.

The next downer follows in the 66th minute: two players from Antwerp get injured. Since there is only one possible replacement, Red&White has only 10 players left. And two goals to score against the Bulgarian team. Let’s note that medical treatment took quite some time. So a few minutes overtime could be expected.

Hope revives in minute 83, when Ralf Geilenkirchen equalizes. But it still doesn’t help. Antwerp need to make one more goal to qualify. So they play fully on attack... and run into two counterattacks in minute 85 and 87. Three minutes to go, three goals to make, and with 10 against eleven. Impossible thinks everyone. People leave the stadium, turn off their television at home.

And then the miracle starts to happen

But then Nico Claesen starts scoring. The first goal in minute 90, and the second one in overtime after 2 minutes. “’t is gebeurd, maar ’t is te laat” says Frank Raes, the television reporter (it happened, but it is too late). 3-3, would it still be possible? How long does the referee let us play?

In minute 94 Rafael Quaranta passes two Bulgarian players with a superb action. And crashes in a third one on the edge of the penalty area! Penalty!!! “No, he is not giving it! He (the referee) is putting the ball outside! It is only a free kick! Hans-Peter Lehnhof prepares to take the free kick. And the same Rafael Quaranta kicks it in the goal with his head!!! 4-3!!! “’t is gebeurd” it happened!!! Supporters run on the field! But have to go off, because the Austrian referee Kaupe still wants to play for one more minute before finally blowing off the game.

I almost went through the ceiling that day, just like the rest of my family. Internet, cell phones and social media were nonexistent at that time. So most people that left the game early or turned off their television would only hear this on the next day. In disbelief, thinking colleagues or friends were making a joke on them. But then they read it also in the newspapers, heard it everywhere on the radio. And in the evening it was of course thé hot topic on television.

More documentation on the miracle of Vitosha Sofia:

If you love lentils and chorizo, you may also be interested in the following recipes: