Makdous, or magdous, is an oriental mezze based on baby aubergines, walnuts and bell pepper. The baby aubergines are traditionally served stuffed. Here we have clearly chosen an alternative approach by serving it like hummus, as you can see in the picture. We presented this Lebanese inspired Makdous with ajvar in duo with hummus. So we went for unity in presentation and pureed everything.

Recently we visited the Lebanese restaurant Quadmous in Berlin. A slightly more expensive restaurant by Berlin standards, but well worth the effort and money! And it inspired us to make this Lebanese inspired makdous with ajvar on our own! 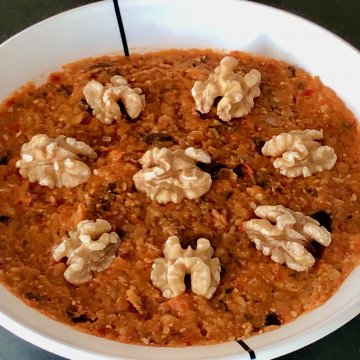 Makdous, or also magdous, is one of those delicious mezzes from the Middle East, the region of Syria, Jordan, Palestine and Lebanon. Because I got the inspiration in a Lebanese restaurant, we created a "Lebanese-inspired" variant here.

For the traditional method of preparation of makdous, baby eggplants are briefly cooked and then stuffed with a tasty mixture of walnuts, roasted peppers, garlic and salt. Topped with walnuts, it is then on the menu for breakfast or as an appetizer (mezze). The purpose of this method is to preserve the (baby) aubergines for the winter. They are traditionally made in the fall and then eaten in the winter.

About Lebanese inspired makdous with ajvar

For this Lebanese-inspired Makdous with ajvar, we started with the ingredients for magdous. But we pureed everything to serve it with hummus as an appetizer.

We replaced the baby eggplant with a classic eggplant of about 200 grams. So a rather small eggplant, not too big. We cut this into fine cubes and then steamed it over hot water. Alternatively, you can also roast them in the oven. I do not recommend to cook the eggplant cubes, because then you will end up with a watery puree and all the flavor will be lost. If you can't steam or roast, it's best to cook the eggplant in its entirety to preserve the flavor. Of course you have to plan more time.

The rest of the color and flavor comes from the ajvar. This is a sauce that actually contains the other ingredients for a tasty makdous. Read more about ajvar further down in the article!

It is also the ajvar that makes this recipe unique: with only three ingredients and hardly any work you create a delicious dipping sauce that goes perfectly along with hummus.

The differences between the different oriental mezze

Are you a bit lost with all those different mezzes from the Middle East? Here we list them briefly, so that the differences become clear:

Our version therefore does not fit 100% in the list. But we also want to present surprising new dishes here.

Ajvar is probably not the most well-known ingredient you've ever come across. But normally you can find it in the larger supermarkets these days (at least in Belgium, the Netherlands and Germany). I first used it as an ingredient in a Hellofresh box. Ajvar is a common spice in many of the recipes of Hellofresh. I suspect that this is also a way to promote this product to the interested hobby chef.

Ajvar is actually a Serbian/Macedonian preparation based on bell pepper and eggplant. Like Makdous, people make ajvar in the fall to be eaten later, during the winter months. Both peppers and aubergines are abundant in the fall and are preserved for the long winter months. For this they are cooked whole on an open fire or grill. The peppers are then removed from the pits and skin to avoid a bitter taste. Then everything is mashed and stewed for preserving in glass jars. A lot of work, but tasty and you can enjoy it for a whole year.

So ajvar is the ideal solution to flavor this Lebanese-inspired Makdous with ajvar without much work. I have also used it in fish soup for the fall before. This is also a good way to use the leftovers of ajvar.

Oriental cuisine is actually the bridge between Mediterranean and Indian cuisine. The basic ingredients are in many cases the same, with different outcome. Find even more oriental inspiration here: