When you think of a Colombian breakfast, you might initially think of the sea and warm beaches, something exotic. But Colombia is also very mountainous, the Andes you know. And those are regions with a completely different climate. And it is exactly where this changua comes from: the more mountainous areas around, for example, Bogota, the capital. It is much colder there, and the working population could use a hearty warming breakfast to start the day. You can read more about the origin and history of this Colombian breakfast below the recipe for changua with croutons. In addition, you can also make a tasty meal soup out of it with some small variations. 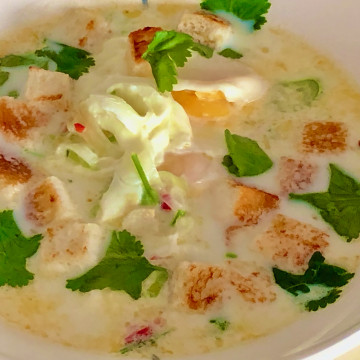 Tips and variations for changua with croutons

The traditional ingredients for a Colombian changua are milk, eggs, water, cilantro, scallion and stale bread. Milk and water are brought to a boil in equal amounts, and then an egg is gently poached into it. The soup is finished with finely chopped coriander and scallion.

As a traditional workers' breakfast, it's perfect for dipping stale bread in. Today it has long outgrown that status and is a classic family Sunday breakfast in Colombia and beyond. On Sunday it may of course also be a bit more refined version. Baguette or croutons replace the stale bread.

By the way, you can also easily transform this breakfast into a brunch or meal soup by adding potatoes. Then cut the potatoes into small cubes or slices. The only extra step is that you first have to cook them in the water-milk mixture before adding the eggs.

The classic changua recipes use water and milk. For my version, however, I used vegetable stock to create a deeper flavor. You can of course also use chicken stock, but then it is not vegetarian. Or just add extra seasoning with salt to bring out the flavors.

For the same reason I used an extra shallot and red pepper. Strictly speaking, that is not necessary for a classic changua. But I think it just gets that little bit tastier.

If you are afraid that it will be too spicy for your taste, you can safely omit the pepper.

Not everyone likes cilantro. Some people just taste soap in it. In that case, you can simply replace the coriander with flat-leaf parsley.

The origin of changua

For sure it is no surprise that the recipe for changua has a centuries old tradition. The Muisca people are supposedly the first to make changua. This is one of the four great peoples of Central and South America, in addition to the Aztecs, Incas and Mayas. Over the centuries, of course, countless variations have arisen. But the basics, a soup based on water and milk, have remained the same. It has evolved from a workers' breakfast to a classic family breakfast. And nowadays each restaurant has its own changua version on the menu.

Changua is a real breakfast classic in Colombia and therefore it features in all overview lists of typical Colombian meals or breakfasts. But I've been there, and I can assure you, this South American country has a lot more to offer! For more Colombian breakfast inspiration, be sure to take a look at the pages below:

Currently we feature only a few South (and Central) American on surprising.recipes. But we have some really interesting recipes from this beautiful continent. And more to come of course! But for now, you can take a look at these ideas:

My history with changua

I first became interested in Colombian cuisine when a colleague of mine moved to Colombia. This is of course a good trigger to get involved with country and culture. And that's how I ended up with this recipe for the first time. But at the same time, another embryonic idea arose: wouldn't that be a good travel destination? Normally we rather travel east, but this would be a completely different direction!

And so a few years later we went on a trip to the northernmost country of South America. The colder mountainous climate of Bogota, which is the region where changua comes from. A great contrast to the warm Caribbean climate of the region around Cartagena. There the menu offered of course fish and tropical fruits. We concluded in Medellin and the coffee plantations south of Medellin. A wonderful region where it always seems like spring.

If you speak Dutch, you can read the Dutch article "Changua met croutons" on gerechtenweb.blog.