Ghent chicken casserole, “waterzooi” in Dutch, is undoubtedly Ghent's best-known export product. And of course, it is a classic recipe of the Belgian cuisine. There are therefore countless variations on this meal soup. And this both nationally and internationally. This basic recipe is very simple and tasty and is very popular with family and friends. Most of the work is actually in cutting the vegetables. But after that, this method of preparation is very straight forward. Later in the article you will learn more about the history of “waterzooi”. And you will find some interesting and original preparations, as well as other highlights from the Belgian cuisine on surprising.recipes. 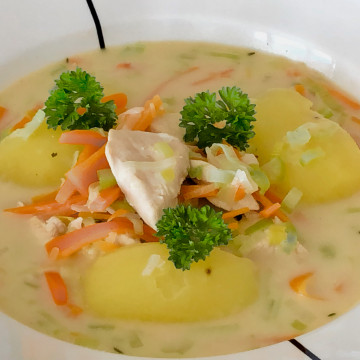 Tips for the perfect and most tasteful Ghent chicken casserole

As mentioned before, there are countless ways to make this chicken casserole from Ghent. Here is some more information about this tasty variant.

In most recipes, the chicken is cooked in the vegetable stew. However, I find that the chicken loses a lot of its flavor. That's why I prefer to bake them briefly with a bit of butter and some shallot and garlic. After that, I add them to the potatoes for the final cooking.

As you can read below, this “waterzooi” was originally made with fish. Also don't hesitate to use other types of meat or fish. You will be surprised by the result. Currently I am thinking of making a version with eel!

No “waterzooi” without potatoes. Usually, however, they are cooked separately and only put on the plate when serving. But then you loose the cooking water of the potatoes, with all the ingredients in it.

That's why I start cooking the potatoes in the chicken stock. And then I add the chicken and vegetables step by step. More or less in order of cooking time. The advantage is that all the flavors stay together and nothing is lost. Moreover, it is precisely this mixture that gives the most intensive taste palette. And you don't waste any cooking water unnecessarily.

The classic vegetables for this traditional Ghent stew are carrots, celery and leeks. You can of course play with the quantities as you like. There is no set rule. You can also decide how fine you cut them. If I don't have the time or the patience, I sometimes dare to cut them a bit coarser. Keep in mind that then they may need to cook a little longer. So you just add them to the potatoes with the chicken.

If you make larger quantities, you can also replace the shallot with a white or yellow onion. I didn't do this here because the portion in the recipe is too small for that. With a portion for 4 people you can easily process a whole onion.

Waterzooi is traditionally served in a thick white sauce. You get the binding through the flour and the egg yolk. The white comes from the cream. First, mix the flour with a little bit of cold water to form a paste. This is to prevent clumping. You then add it to the “waterzooi” and then have to boil for a few more minutes to cook and bind. I don't want the cream with the egg to boil anymore. So I reduce the heat and let it steep while I gently stir it.

A leaf of parsley or chervil is not a must, but always looks good as a finishing touch.

The origin of Ghent chicken casserole

I always like to find out the history of a dish. Where does the word “waterzooi” come from? And is it still the same as the original version, or has it changed over time?

Well, Ghent waterzooi does indeed come from Ghent and was originally a soup that was eaten with bread. The word “zooi” comes from “zieden” in Dutch, which actually means heavy boiling. So it was a boiled vegetable soup with fish or later chicken.

However, the original casserole was not eaten with chicken, but with fish. More specifically the burbot that was very common in the Ghent waters for a long time. But because of the pollution, this fish disappeared and that's how the version with chicken was created as a replacement. A burbot is not an eel, by the way, but a type of freshwater cod. But it did give me the idea to make this with eel.

And how far back do we have to go in history? Well, apparently it was one of Charles V's favorite dishes. And he lived in the sixteenth century. He liked to eat it when he stayed in the St. Jorishof in Ghent.

Ghent is one of the major towns in Flanders, Belgium. It was very prosperous during the late middle ages, with approximately 50.000 inhabitants back in 1300. Nowadays it is still one of the major cities in Flanders and together with Antwerp and Bruges very popular among international tourists.

Alternatives and additional resources for waterzooi

As mentioned, there are a thousand different ways to make waterzooi. If you are looking for more inspiration and background, you may like the following articles:

Of course, the Belgian kitchen has much more to offer than waterzooi. We can offer you the following surprising.recipes:

Is it a soup or a stew? Nevermind, as long as it tastes well. You may also like the following surprising.soups: