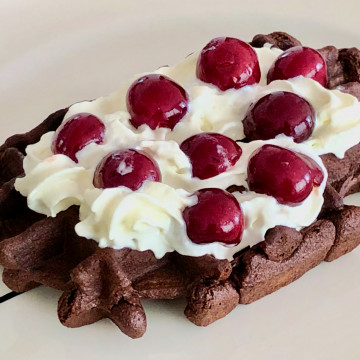 Chocolate is so important. But there is chocolate and chocolate! Of course you should use dark Belgian chocolate if you have it available. This chocolate should contain at least 75% cocoa for an optimal result. Otherwise the chocolate is too sweet and we want to have the bitterness of it as a counterweight to the other sweet flavors.

The sugar provides us with enough sweet flavors already. To stay into the dark, I use brown sugar. In my opinion it also tastes better than refined sugar. But if you don’t have it at home, or you prefer to use white sugar, feel free to do so. It does not affect the basics of the recipe.

I used whole wheat flour because I had it on hand. It contains more fiber and is healthier. As a result, the waffles do not stand out and are a bit heavier. White flour or self-rising flour are of course also alternative options. In the latter case (self-raising flour) you should of course no longer use yeast. If you don't have yeast at home, you can replace it with baking powder. The packaging normally indicates how much you need for a certain amount of flour.

As you can see in the pictures, I only used a few cherries for finishing. Next time I will sprinkle them with cherry water for additional flavor (and alcohol). And in the next version, I will first top the waffles with lots of halved cherries. And I will add the cream and some chocolate chips as a last step. This balances even much better with the sweetness of the waffles.

What I didn’t do yet, but is also on my “to-try” list: mixing the cherries with the dough. I think you get even a better bitter-sweet contrast in the waffles themselves! I guess this cannot be wrong!

The “Schwarzwälder Kirschtorte“, or Black Forest cherry cake, is probably the most famous German pie. More or less on the same level as the “Wiener Sachertorte” for Austria and Vienna. As for the cherries, the relationship is quite clear. Just about every component of the cake is flavored with Kirsch: the biscuit, the whipped cream and then of course there are the cherries themselves.

Kirsch (cherry water) is a clear colorless brandy made in the Black Forest. It is a double destination of sour cherries, including their stones. Normally it contains about 40% alcohol. It is famous for its usage in the Black Forest cherry cake. But apart from that, it is also used often in a German or a Swiss cheese fondue.

As with many old recipes, it is difficult to trace back in detail where and when they originated. The well-known version of the Black Forest cherry cake probably originated in 1930 in Tübingen, a mall town on the edge of the Black Forest. Today, this city rather belongs to the Baden region. The precursor to this cake is said to be a dessert with candied cherries and whipped cream, flavored with kirsch. It is only from the 1950s that this cake has started to gain a lot of popularity, in Germany and in the world.

Of course, I highly recommend to make this black Belgian waffles - Black Forest cake style. But if you want to make the cake by yourself, you can find some good recipes here:

As mentioned in the introduction, we have a series of surprising.waffle recipes on surprising.recipes. Feel inspired by the following ideas: