Belgium publishes all new laws in the “Staatsblad” (Le Moniteur Belge), the official Gazette. This is the journal, nowadays a website, where all new laws are published once they become official. And since asparagus is so important for Belgium, you may also find by accident an asparagus recipe in this book of laws. And that is how I indeed found the inspiration for these “Asparagus by Belgian law”.

Admittedly, in this case it wasn't really meant to be so. And the instructions were also only in the French version. And also only for a short time. But as it goes: once on the internet, always on the internet. We will explain the whole story in detail under the recipe for “asparagus with mountain cheese gratin”. This is my adaption of the recipe that appeared in our book of laws. So be sure to read on! 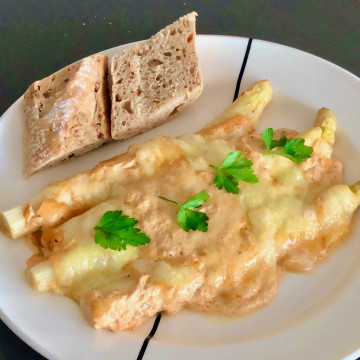 About asparagus by Belgian law

An off-topic article in the Belgian news drew my attention: the Belgian Official Gazette accidentally publishes a recipe for asparagus. The lawyer Morgan Moller came across the instructions for an asparagus gratin in an otherwise boring text of a Royal Decree. “Bon appetit”, French for “have a good meal”, was the last instruction.

Of course this was not the intention, but it is of course funny to find a recipe in the middle of a law. Even state officials are human. And during their break they sometimes look up a recipe that they want to make at home in the evening. Something probably went wrong with copy-paste and the instructions ended up in the Official Gazette. Very recognizable. Who hasn't experienced something like this themselves? What is your most famous copy-paste mistake? Let me know in the comments!

It was only in the French version by the way. And of course the error was quickly corrected when it became public. But the memory of the Internet does not forget. The lawyer in question, Morgan Moller, had already taken a screenshot and video and posted it on twitter.

But where did the employee get the recipe in question? And what are the ingredients? Does it taste well? And what is this Cantal? Many questions that I did research for you.

Where does the recipe for “Asparagus by Belgian law” come from?

The original recipe that the employee copied from the Official Gazette probably comes from the website marmiton.org. This is a French-speaking culinary community where millions of (hobby)chefs share their recipes. And then someone copies and pastes that during working hours to make it at home in the evening. Very recognizable and understandable: shit can happen.

Cantal is the region in the French Auvergne where this cheese is made. Pliny the Elder already mentioned this hard cheese in his writings. People needed a cheese with a long shelf life that could also be eaten in winter. In addition, they also used it for barter with other regions. For that, you need of course a cheese that has a long shelf life and is easy to transport.

Since 2012, Cantal has been one of 44 French cheeses that are allowed to carry the AOC/AOP quality mark.

About asparagus with mountain cheese gratin

Of course chances are little that you will find Cantal in your supermarket. That's why I used a Swiss mountain cheese for my “asparagus with mountain cheese gratin” as an alternative. But in the end you can take any hard cheese with an intensive taste.

You can use thicker asparagus for this asparagus gratin. I first cook them for ten to twelve minutes in a wide pan. Alternatively, you can cook them in such a high asparagus pot. Or steam, then they retain their taste even much better.

In the meantime you can turn on the oven, grease the oven dish, cut the cheese into small cubes and make the sauce with the sour cream. When the asparagus are ready, drain them briefly before placing them in the oven dish. Then a layer of cheese cubes, the sauce and cheese again to complete the whole. After twelve minutes in the oven, the cheese has completely melted and the gratin has a nice brown crust. Finish with some freshly picked parsley. And enjoy with a piece of fresh baguette and a nice glass of white wine.

We publish at least one original asparagus recipe every year on surprising.recipes. This year it was very tight due to circumstances, but just at the end of the season I still managed to do so. Surprising asparagus recipes from previous years: