I thank the Belgian travel reporter Arnout Hauben for the inspiration for this article. In the series Straight through the Mediterranean (Dwars door de Middellandse Zee) he travels from Gibraltar to Jerusalem. And one of his stops is Menorca, and the town of Mahon (Maó). And according to legend, that's where our most popular sauce comes from: Mahonnaise - the origin of mayonnaise. Reason enough to investigate this more in detail!

But many people shy away from making their own mayonnaise. For fear that it will not thicken. That's why I've included here a simple basic recipe with an immersion blender that can't fail. Try it yourself once, and never buy mayonnaise again in the supermarket. 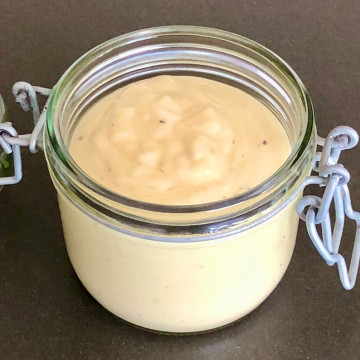 Mahonnaise - the origin of mayonnaise

About Mahonnaise - the origin of Mayonnaise

For the origin of mayonnaise (according to legend) we have to go to Maó - Mahon, the capital of the Balearic island Menorca. This is the little brother/sister of the much more famous Mallorca. The white sauce from Mahon is actually the result of the battle of Maó on May 20, 1756. The French defeated the British over this strategically located island. And that had to be celebrated! But unfortunately the chef didn't have the ingredients for a classic cream sauce. So he had to improvise and made an alternative white sauce with eggs and oil. Could he imagine this would become world famous!

The “Mahonesa”, the sauce from Mahon, was very tasty and the generals liked it. Back in France it also appeared on the menu there, bastardised as “mayonnaise”. From there the white sauce, shortened as mayo, conquered the world.

The original name is even more common in Spain. Spanish people use both names: mahonesa and mayonesa. In Spain, people will not like to hear that this is a French sauce. After all, the origin is on Spanish territory. Moreover, many say that this local recipe has existed there for a long time, and that the French simply adopted it.

There are also indications that an at least similar sauce was already made by the Romans. In the first century AD, the Roman literary scientist Pliny (Plinius) already described a sauce that resembles mayonnaise suspiciously. He called it aïoli. So that victory sauce from 1756 probably didn’t come out of the blue.

The following articles also research the origins on mayonnaise:

About Mayonnaise with the immersion blender

A few centuries ago, there were of course no immersion blenders. In that era everything had to be beaten by hand. To avoid crazy or runny sauce, you had to very carefully add the oil to the egg and the flavor carriers. Drop by drop so to speak.

But since the invention of the immersion blender, anyone can actually make mayonnaise. It's simple, can't fail and you don't have to be a cook for it! And it is ready in five minutes. 10 minutes if you add the dishwashing. So there is really no reason anymore to buy this tasty sauce in the store or supermarket. You make it faster than you can buy it. Know what you are eating and enjoy it more!

Vary with the ingredients!

In addition to the obligatory egg and oil, the classic seasonings are lemon juice, vinegar and mustard. You can vary according to your own taste and preference. Pepper and salt are of course also included. Some people also add sugar to neutralize the vinegar flavor.

I like to use white wine vinegar to flavor my mayonnaise. But you can also work with other types or pure vinegar to find what tastes best for you. Or make it dependent on the ingredients you have at home.

I like a lemon flavor. Nice and fresh! If I have fresh lemons at home, I use them. But lemon juice or lime juice from a bottle does the job just as well.

What about the white of the egg? Should you use it? Can you use it? The original recipe only uses the egg yolk. But then what to do with the white? Of course, you can make a lot of tasty recipes only using the egg whites. But if you use the immersion blender you can just make it yourself easy and use the egg completely. So both the egg yolk and the white. No problem!

It is important that you use fresh eggs! Since it is a cold preparation, any salmonella will not be cooked or fried. Risk patients and pregnant women must therefore also be careful.

Another advantage of making it yourself is that you can make as much as you need. As you can store it only for about a week, you should not make too much big quantities. Throwing away food is always a pity.

What to eat with mayonnaise? Or vice versa.

Of course fries go with mayonnaise like Laurel goes with Hardy. You cannot have one without another. But there are many more surprising.recipes where you can use this delicious Mahonnaise - the origin of mayonnaise:

By the way, I dare to spread that on my sandwich as an alternative to butter. Delicious with a thick slice of cheese!