Are you looking for a simple and hearty midweek meal? Then this easy potato chorizo stew is the perfect choice to revitalize with calories and moisture. You need only two main ingredients and it will be steaming in your plate in only half an hour! 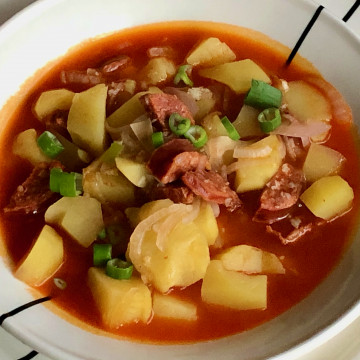 A good advice: make the stew already one day in advance, or make large quantities so that you can have it the day after also. It will even taste much better on the 2nd day!

There are many different kinds of potatoes. The best choice for this stew is to use very starchy potatoes. They will release a lot of starch while simmering. And this will bind the sauce. If you feel the sauce is too liquid, you have several options. The first one is to remove some pieces of the potatoes and crush them with a fork. This will release additional starch. Another option is to add some starch that you solved before in some cold water. Normally I also remove the lid for the last five minutes, so that the sauce can reduce.

You may wonder where the red color is coming from. Well, this is exclusively released by the chorizo. No need to add paprika, pepper or tomatoes! Later in this article we will explain why the chorizo releases so much red moisture.

Most chorizo sausages are quite salty on their own. That is why I personally do not add any salt at all. But most people use more salt than I do. So you may add some, but don't overdo it! I am more on the spicy side, so I add pepper and chili flakes to this stew.

You may also finish your plate with parsley instead of the green parts of the spring onion. No problem at all! I just had this spring onion at home, so I used it.

And finally, like most stews, also this stew even tastes better the day after. So you might decide to make enough for two days. Or prepare it one day beforehand and just heat it up on the second day.

This is of course a very basic recipe. But the advantage with these kind of stews is that you can bring in a lot of your own creativity and ideas to make your own variations. Here are some ideas to build on:

Probably most of you know that chorizo is a Spanish sausage. But from which region in Spain do they exactly come form? And what about the red color? And last but not least, what is it made from? We will find it out for you.

The chorizo sausage originates form Extremadura. This is a region in Spain Southeast of the capital Madrid, at the border with the neighboring country Portugal.

One of the typical ingredients of the chorizo ??sausage is paprika (bell pepper). Hence the red color that is released during baking. But the color is not the only reason why paprika is used in this typical sausage. The essential oils of the pepper act as a preservative and ensure a good shelf life. Remember that the sausages already existed before the refrigerators! In addition, the chorizo ??sausage normally consists of coarsely minced pork and is seasoned with salt, garlic, oregano and possibly sugar or cumin. There are of course many variants and sometimes they are also smoked for better preservation (again, the missing refrigerator topic).

In fact I was surprised to find only one surprising recipe that is also using chorizo. I have some more on my Dutch site, gerechtenweb. If I find time I will translate them also in English.

I remember I was tired of potatoes for many years. I had had more than enough classic boiled potatoes. But I rediscovered them with some creative ideas and surprising approaches to make them. You may find some here: