These tasty Madeleines with cranberries, soaked in orange juice, are simply not to be missed! I am a big fan of dried cranberries. I often use them as an alternative to raisins. They are slightly less sweet and a bit larger. It is a nice flavor variation on the classic raisins. Which of course does not mean that you cannot simply replace them with raisins for these Madeleines. 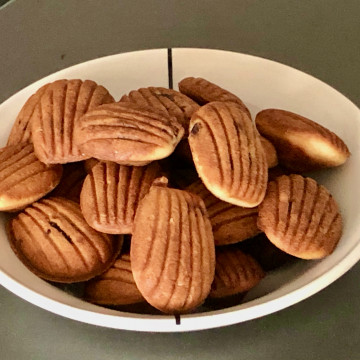 About tasty Madeleines with cranberries

The combination of Madeleines with cranberries is the unique and surprising part of this recipe. Cranberries are more sour than grapes. But during the drying process the taste changes and becomes sweeter. Most dried cranberries also contain added sweetener. So don't be afraid that your Madeleines will be sour. They will taste perfectly!

Like raisins, it is also best to soak dried cranberries before using them in pastries. And just as with raisins, orange juice is my favorite for that. I just love that combination! Add another good teaspoon of cinnamon and the taste is really delicious!

To prevent the dough from getting too liquid, I squeeze the cranberries a bit before mixing them in. It is not necessary to squeeze them completely, but squeeze them a little bit. Or you might just let them drain very well.

Where do they come from? And why are they called Madeleines? We will shine some light on these important questions. Know what you eat.

I guess it will be no surprise if I tell you Madeleines originate from France. More precisely from Commercy, in Lorraine. This is the area between Alsace and Belgium. It is quite an old recipe, so the origins are not 100% clear. There are different versions of the origin of these pastries. One of the most plausible is that a kitchen maid, “Madeleine”, had to save a failed dinner with these hastily baked shells. The occasion for the celebration was the visit of Stanislas Leczinski, King of Poland, in Commercy in 1755. Through these noble connections it also quickly became popular in Versailles and from there throughout France and the world.

The baking of the Madeleines

To bake Madeleines you need of course the typical shell shaped molds. Typical are the stripes in the shape, which create the shell shaped ribbons in the cakes. On the upper side their shape is smooth.

If you bake them in the oven, you have to count on a baking time of twelve minutes at 180 ° C. The perfect result is that they are beautiful yellow on the top and light brown on the ribbed bottom.

However, I did not bake them in the oven, but in my Tefal Snack Collection, a multi-functional waffle iron with different molds. Including one for Madeleines. If you use these the baking time is much shorter: four minutes is more than enough. A small disadvantage is that you do not have the typical color difference between the bottom and top. An advantage is that they all look the same because the space to rise is limited by the double shell. And you will have to bake more batches than in the oven. Most multi-functional irons are limited to six or eight Madeleines.

As mentioned in the beginning, I love cranberries and also like to use them as a replacement for raisins. Check these surprising recipes with cranberries: