Are you looking for some inspiration and variation for your weekday menu? Not too complex but something new and different? Then this nest with seasoned tuna is certainly an option to consider. It is different than the classic cooked or mashed potatoes, but still easy to make and very straightforward. the most complex part of the recipe is in fact forming the nest (at least for me). 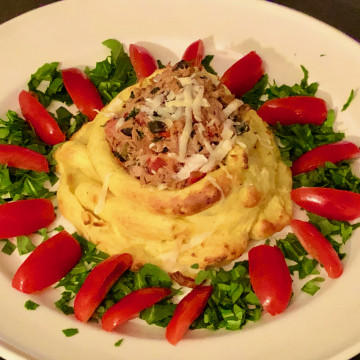 for the potato nest

for the tuna seasoning

for the potato nests

for the tuna seasoning

This recipe combines the ideas from two different recipes. On the one hand I saw something similar on Italiankitchenstories. On the other hand there was my Greek tuna fish starter, the first ever recipe I published on gerechtenweb.blog.

The most difficult part of the recipe? Forming the nest. Not because of the cooking. Making mashed potatoes is not such a big issue after all. But my handicraft skill have a lot of room for improvement. I tried to form the nests with the piping bag. For that, you have to make sure that your puree is mashed well. Otherwise you risk that some potato parts might block the piping procedure. If the mash is too thick, you may add a dash of milk to make it smoother. But don't overdo it, because otherwise the nests will loose their shape. If you don't have a piping bag, you may also form the nests by hand.

After 10-12 minutes in the oven, the nests will have a fix form, and will have a golden brown color. Then they are ready for the tuna mixture.

I made a seasoned tuna mixture, based on this Greek tuna fish starter. I wanted to keep it simple for a classic weekday menu. But you can be very creative with it and make it up to your own taste and inspiration. For example you can add some ginger and/or soy sauce for a more expressive taste. You like it a bit more spicy? Then consider adding a chili pepper. Or you may add some freshness with basil or cilantro. You can make a lot of variations on the basic scenario. Feel free to share your ideas with the community!

When I was young I thought tuna was a small fish. Little cans for little fishes, like sardines. Until I was on a fish market in Funchal, Madeira. There I saw for the first time a gigantic real tuna fish. I still wonder how many cans they make from one big tuna.

But you can make a lot of surprising dishes with canned tuna. And as usual, we have some good inspiration on surprising.recipes: