I had the inspiration for this sensational Mozzarella Panna Cotta while watching the Taste (German version) on television. In this cooking show 16 candidates (hobby cooks and professional chefs) have to create dishes they present on a spoon. Four notorious chefs taste their creations blindly and decide who has to go and who becomes a golden star. Finally only one candidate remains that wins the contest.

In one of the German episodes of 2020, one of the candidates wanted to make a Mozzarella Panna Cotta for dessert. The idea struck me, and the coach as well. I still hear him saying what a genius idea it was! However I have to admit that this spoon didn't win the contest. But I liked the idea enough to start working with it myself. 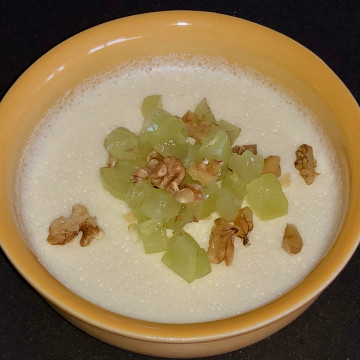 Panna Cotta is an Italian dessert. And if you translate it literally to English you would call it "cooked cream". Which it basically is. It sounds like such an evergreen that you would think it exists for centuries. Well, not really. It is not mentioned in any cookbook before the 1960s. There are unconfirmed rumors however that an Hungarian mother made it already back in the 1900s.

Regionally the dessert is attributed to the North-West of Italy, to the region of Piemonte. In 2001 Piemonte included Panna Cotta in their official list of regional products.

The basic recipe for Panna Cotta

The basic recipe for Panna Cotta consists of cream, sugar and gelatin. And although it means cooked cream, it is only heated until sugar and gelatin dissolve. You can make many variations by adding additional flavor. For example with vanilla, rum, coffee or caramel. In my version, the savory flavor comes from buffalo Mozzarella and the sweet accent from honey. Very often it is served with a fruit puree. I opted for grapes and walnuts to have a bit of crunch. Moreover, these go very well with the buffalo Mozzarella.

As I mentioned already, the basic recipe is dead simple. And I can imagine that you first want to try a basic version of Panna Cotta, before trying my variation with buffalo Mozzarella. So here are some recipes for your inspiration:

Easy and surprising desserts. That is something we love to see on surprising.recipes. So you can get more inspiration for sensational dessert with the following recipes: