This rabbit back in cherry beer might become the new Christmas classic. On top of potato waffles they are super tasty. However I must warn you: for the best taste you need to use real Belgian cherry beer! Don't use a beer with cherry lemonade or so. It will only be sweet, but not fruity. Moreover gives the cherry beer marinade the rabbit fillets a nice pink-red color. And I stayed in the same concept with the cranberries. I also gave them to the marinade which gives them a great cherry taste! 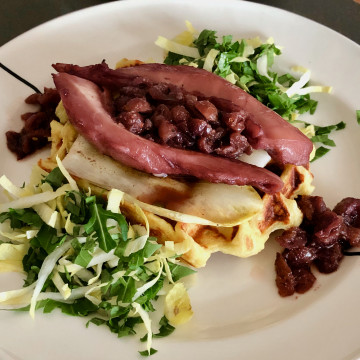 rabbit back in cherry beer

Dough for the potato waffles

rabbit back marinated in cherry beer

Actually, my original plan was to make these potato waffles with rabbit fillets marinated in cherry beer for Christmas (2020). But, as you can imagine, some 2020 special circumstances forced us into an alternative Christmas experience... So I publish it now, because everything will start getting better. And so we have something already for next Christmas to look forward too.

For this recipe I used filleted rabbit back strips. They are of course a bit more festive and more expensive, but Christmas is only once a year! One fillet is about 50 to 70 grams, depending on the size. I use two back fillets per waffle. This really is enough because probably you have been eating lots of other snacks and appetizers already.

And the best is yet to come! This recipe is easy to make and can be prepared almost completely on the day before. You can perfectly prepare the mashed potatoes and then the dough for the waffles one day in advance. And for the marinade, you should also schedule no more than five minutes on the previous day. So, with Christmas, you only have to do some vegetables, bake the waffles and bake the rabbit a few minutes in the oven.

One more thing: with the leftovers of the cranberry-cherry sauce you can make a delicious jam. Reheat it for a few minutes and add some jam-sugar and you will have a delicious breakfast in the next days!

Cherry beer, or Kriek Lambic, is only one of the famous Belgian beer types. You really have to taste these Belgian fruit beers to understand their specific taste. In many other countries fruit lemonade is added to the beer. But this makes the beer only sweet, not fruity. The typical Belgian cherry beers contain 20-25% fresh cherry juice.

Its origins come from the region of Brussels. At the end of the 19th century, local brewers there began adding surpluses of sour cherries from their own orchard to their local lambic beer. The wealthy Brussels bourgeoisie liked it a lot, and began to ask for it more and more. The farmers understood there was a market for this new beer and started the commercial development of "Kriek", the cherry beer.

In Belgium, there are two registered methods to make this beer. The so-called "Oude Kriek", the older method is even registered as a regional trademark. This is a more complex method, practiced by for example the breweries Lindemans and Boon. After the second world war, easier and more modern commercial methods came to the market under the name "Kriek". For this recipe I used St. Louis Kriek of the brewery Vanhonsebrouck.

Meanwhile I love potato waffles. For me it is a good variation on the classic mashed potatoes. Last summer, I used the same potato waffle recipes for savory potato waffles with figs and plum compote. I expect more will follow.

Are you looking for more recipes with surprising potatoes? Then check out the following ones: