In the middle of the Corona crisis I started missing "peperkoek", my and soon your favorite Flemish gingerbread. These are the little things from home that you miss abroad. No deal I thought, for sure I will find some in the supermarket. "Fehlanzeige", nil. I think I turned three supermarkets upside down but did not find anything close to it.

Only during the Christmas period you will find a lot of "Lebkuchen" in Germany. So I started realizing that it must indeed be a regional product from Flanders and the Netherlands. I was in high need of the taste, so I decided to bake it myself. 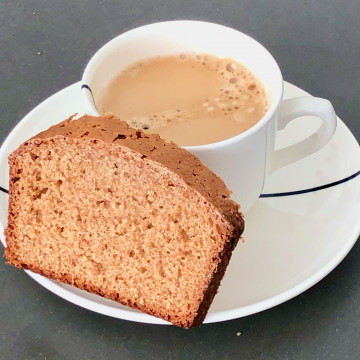 Your favorite Flemish gingerbread is delicious with your breakfast or as a snack. This is the basic recipe on which you can vary with spices.
5 from 3 votes
Print Recipe Pin Recipe
Prep Time 15 mins
Cook Time 45 mins
Total Time 1 hr
Course Breakfast, Snack
Cuisine Belgian, Dutch, Flemish
Servings 1 cake
Calories 2219 kcal

About your favorite Flemish gingerbread

This is a typical case where the name is not covering the load. Neither in English, nor in Dutch. You may see in the ingredient list that neither ginger, nor pepper are on the ingredient list. This goes back to the middle ages where all kinds of new spices were grouped under one name: pepper. You see this also in a lot of other languages: pepperkaker (Norwegian), pepparkakor (Swedish), brunkager (Danish), piparkÃ¶kur (Icelandic), piparkakut (Finnish) and piparkÅ«kas (Latvian) or piparkoogid (Estonian).

I often say that in Belgium we are good in anything that is unhealthy. Apart from your favorite Flemish gingerbread we also have fries, chocolates and beer to name some. Surprising.recipes meanwhile has a lot of delicious Belgian inspired dishes you might enjoy: