The idea for Mac&Biscoff tiramisu started when I thought about a dessert I ate as a young child at my grandmothers place. I have no idea what is was anymore. Just that is was based on macaroni and that it came out the oven. But I starting thinking, how can I make a dessert based on macaroni?

After some trials I came up with this fantastic tiramisu variation with Macaroni and Biscoff cookies. They combine greatly together and make the most surprising tiramisu. You have never eaten this before! 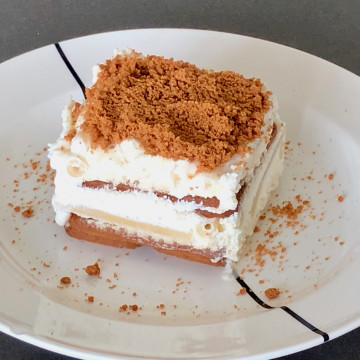 After cooking the macaroni in milk, you will have a delicious glass of sweetened cinnamon milk. Consider it as a by-product that works as a trailer or appetizers for this fantastic tiramisu!

I am not telling you anything new when I say that tiramisu is an Italian dessert. But did you know that it is quite modern? Reportedly, it was served for the first time in a restaurant in Treviso in the 1960s. And only in the 1980s it started to appear in different cookbooks and lexicons.

Tiramisu and sleepless in Seattle

In the United States, interest in the recipe grew starting in 1993, after the release of the movie "Sleepless in Seattle". Sam Baldwin (Tom Hanks) is asking his friend for advice for dating with women. He answers "tiramisu" leaving open in the scene what exactly it is. From day 1 after the release, the makers started receiving questions about this mystic "tiramisu" that you need for dating women. People didn't even believe it was just an Italian recipe. They would rather think it was a dance, or something sexual. Tristart started a marketing campaign capitalizing on the wave. Today it is hard to imagine that people don't know what tiramisu exactly is. But that is how tiramisu made its entry in mainstream America.

I love Lotus Biscoff cookies! I can resist all kind of sweeties, but not these Belgian caramel sweeties. In our offices, our coffee vendor always offers a big bos of Biscoff cookies at the beginning of the month. It is one of those little highlights that make you feel better. (That was at times where we were still allowed to go in office, before Corona came and forced us to work from home).

but luckily also the supermarket sells them. So I am not dependent on the deliveries in the office. Even better, they also sell Lotus Biscoff cookie butter! This is a spread like Nutella, but then based on the Biscoff cookie recipe. You have it as a pure spread, but also with the crunchy bites of the caramel cookies in it. So Yummy!!! It was invented by a Belgian woman that entered a tv contest with this idea. Guess what? She won among many other participants! After the tv show she teamed up with Lotus to commercialize this whole new spread.

The exact ingredients are a well kept secret by Lotus, the Lembeke based company in Belgium. They are crunchy, have a unique flavor and are of course caramelized. There are so many ways to enjoy them! Of course, you should have then with your coffee. Or rather have your coffee with them. You can dip them in your coffee, crumble them, have them as a spread on your bread, ... And they are a great ingredient to give a special twist to so many desserts. In you want to have some inspiration, you can have a look on the recipe page of Lotus Biscoff cookies.

Macaroni is an Italian type of pasta shaped like narrow tubes. It is mostly cut in short lengths. The original macaroni is a straight tube. but there is also a curved variant, called elbow macaroni. This last one is mostly used in the famous Mac&cheese. I borrowed that name for this recipe, but I used the straight macaroni for my Mac&Biscoff tiramisu.