This Belgian endives and arugula salad with blood sausage has two parallel goals at the same time. First of all it deals with the leftovers of our Sylvester menu. Additionally it is a healthy dish to recover from all the calories from the last two weeks.

You can have it as a salad, with or without the blood sausage. But it can also be a great starter for your menu. Maybe this can already be an idea for the next Christmas 😉

I first made the combination of Belgian endives and arugula as a side dish for our Christmas menu. Both work perfectly together and make a great taste. The blood sausage has a savoury taste that adds perfectly to the salad. 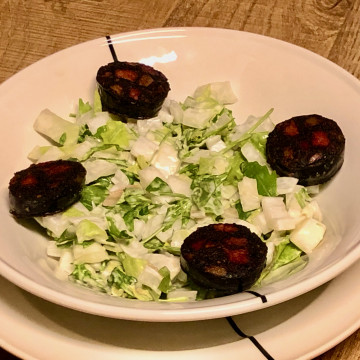 This Belgian endives and arugula salad with blood sausage can be served as a side dish, a salad or as a starter. Fresh, healthy, simply and delicious...
5 from 2 votes
Print Recipe Pin Recipe
Prep Time 10 mins
Total Time 10 mins
Course Salad, Side Dish, starter
Cuisine Belgian
Servings 2 persons

The history of Belgian endives

Chicory, or Belgian endives, are very typical vegetables for the region Belgium, the Netherlands and the North of France. They are exported worldwide. There is a story that it was discovered by accident by a Belgian farmer in the 1830s. I reported on that in my last post of 2018, filled Belgian endives with prosciutto.

But after some more research, in Dutch, I found another better documented history. Apparently the technique of "forcing" vegetables to grow in winter in a warm and dark place was already developed in France in the 17th century. But it was around 1867 that "white loaf" (witloof) became available on the markets in the region of Brussels. The white gold became very popular and more and more farmers started learning the technique to grow them and sell them in the region and more and more internationally.

You can find a great variety of recipes based on chicory/Belgian endives on surprising.recipes. Here are some of my favourites: