Belgian endives, also called chicory are one of my all time favourite vegetables. They are typical autumn vegetables and so I do post them normally in this period. In fact I like them so much, that most of the time I just don't take the time to make postings, and I have a few favourite recipes that I make all the time. But yesterday I made these filled Belgian endives in prosciutto, which is a new variant and thus a new posting.

So here is my new wit loof from Belgium. 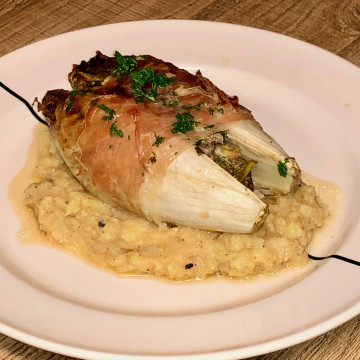 Belgian endives (chicory) are also called the Belgian white gold. together with Brussels sprouts they are stronghold vegetables for the Belgian kitchen. And they are healthy, unlike many other Belgian specialities: beer, fries, chocolate, ... Every Belgian cook has his own favourite and special recipes with chicory. A very good professional overview you may find on "Dagelijkse kost", the website of Jeroen Meus, a famous Belgian television cook (in Dutch).

Of course you can also find my own favourite recipes with Belgian endives on surprising.recipes:

Why are they Belgian? Why are they white? These are important questions that need to be answered. Like many great inventions this is also a fluke. Somewhere in the 1830s, a Belgian farmer let chicory roots dry in his basement for later usage in (surrogate) coffee. A few months later white leaves with a slight bitter taste had grown. It took ages to develop the method to make chicory roots grow a second time in a dark basement to become Belgian endives. You can find more facts&figures on Belgian endives on specialtyproduce.

This recipe is also featured in a roundup post "28 frugal fall recipes" from Humble Delight. Many thanks for that of course!