This Sicilian tuna pasta with fried capers is super easy and ready in no time. Really a dish for a quick lunch if you don't have much time. So for a normal weekday. And the real stars on the plate are the fried capers. I'm sure, next time you'll add an extra portion of them! 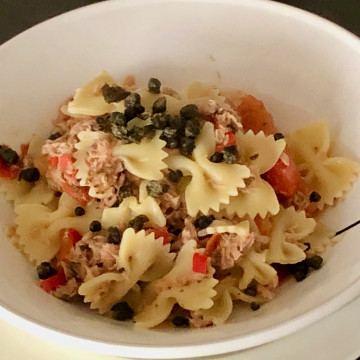 This is a typical dish from Italian cuisine. Easy, few ingredients but oh so much flavor! Friends of mine are enthusiastic and regularly make it as a quick and tasty lunch.

I got the inspiration for this recipe from Jonoandjules, an Irish blog with a lot of interesting dishes.

Can I also use fresh tuna?

Of course you can also make this dish with fresh tuna. But it is thought as a midweek dish that should be tasty and ready quickly. So we have chosen the comfortable solution from a can. If you work with fresh tuna, you must of course cut it finely first. Or you could also fry it and then pull it with a fork and crush it fine. Pulled tuna so to speak.

You can perfectly replace the plum tomatoes with cherry tomatoes as an alternative. In the latter case, you have to halve the cherry tomatoes. You can of course also use other types of tomatoes. It is important that they are well ripe and juicy.

A shallot and a (seeded) chili pepper serve as the flavor base for this Sicilian tuna pasta with fried capers. If you are afraid that this chili pepper might make the dish too spicy, you can also take half or omit the whole.

Quite a bit of oregano tastes perfect in this sauce. Other herbs that you can add and use are freshly chopped thyme leaves, sage and even a basil leaf.

I don't think salt and pepper is necessary here, but you can always use that. The chili pepper brings enough sharpness. And the fried capers are the real stars and salty seasonings on this plate.

Fried capers, the stars of this recipe

The fried capers are the real stars on this plate. I ate them fried for the first time at a food fair in Berlin. That was one of those inspirational moments on which you know you're going to use that somewhere, somehow. Until then I had only used capers in sauces or salads.

But fried capers are a real sensation. They become crispy and the taste becomes much more pronounced. The saltiness of the capers becomes much more dominant because the acidity of the pickling liquid is broken away.

I'm sure, next time you bake some more capers because they are so addictively delicious. For this article I was briefly tempted to double the amount, but I didn't want to exaggerate. And so you can create your own version with much more fried capers!

But what exactly are capers? And where do they come from? We've just checked it out for you.

Capers are neither fruit nor vegetables. They are the flower buds of the caper bush. We usually eat them pickled in jars.

Probably less surprising is that the caper plant is a Mediterranean shrub and grows in the countries around the Mediterranean. The tastiest capers grow on volcanic soil, such as in Sicily.

There are 7 different types of capers, from small to large. The largest are also sometimes called gherkins of capers (cornichon de capres), or caper apples. They also have a different taste because it concerns the fruits that arise from the flower. They are also picked later. If you have the possibility to eat them fresh, you will find the smaller ones earlier in the season. The larger ones will come later in the season. Because the flower is further developed at that point in time, they also carry more flavor.

The small capers are generally more expensive as they are harder to harvest.

Do you want to learn more about capers? Be sure to check out the following articles:

Which pasta to eat with Sicilian tuna pasta with fried capers?

This Sicilian tuna pasta with fried capers can be eaten with different types of pasta. It is best to use short pasta. So no spaghetti or linguine.

I like to eat this with penne, farfalle, orechiette or pasta shells. Orzo is very small, but why not? Just take what you feel like!

Can you also eat Sicilian tuna pasta with fried capers as a cold dish?

An additional advantage is that you can make larger quantities with peace of mind. You can just eat the leftovers cold afterwards. For example with a piece of baguette.

Of course, we have much more recipes with these surprising capers. Most of them Italian, but also completely different creations.