Hummus with sesame paste, or “Hummus bil tahini” is a delicious spread or dip based on chickpeas. I discovered it once while traveling in Jordan. It is therefore a typical dish from the Middle East. I published a first version of it on March 31, 2008, on the dutch blog “gerechtenweb”. In other words, those were the absolute early days of gerechtenweb. Recently (late 2021) I was in a Lebanese restaurant. And of course this mezze was on the menu. This prompted me to rewrite and modernize the article, both in Dutch and English.

Further down the article, below the recipe, you'll find everything you've always wanted to know about Hummus and sesame paste. But let's start with the recipe. 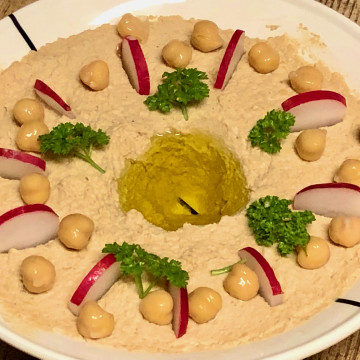 About Hummus with sesame paste

Hummus with sesame paste (hummus bil tahini) is a classic mezze (starter dish) from the Middle East. Super simple, but also super tasty! The classic ingredients are boiled chickpeas, sesame paste, lime juice and garlic. Put everything in the blender and you're almost done. Normally you finish it with whole chickpeas, parsley and paprika. For this article I made a variant with radishes.

Hummus is traditionally eaten as a dipping sauce with for example pita bread. Today it is very popular all over the world and is produced on an industrial scale as a snack with biscuits. Hummus is also often eaten with falafel, another chickpea-based classic from that region.

It is not known exactly where and when hummus was eaten for the first time. But certain is that this mezze is centuries, if not thousands of years old. The first written notes can be found in a cookbook from Cairo in the 13th century.

Meanwhile, the concept of hummus is very widespread and loved. There are infinitely many variants with completely different ingredients. You may find more inspiration in the following articles:

Chickpeas are also very healthy and contain a lot of protein. That is why they often act as meat substitutes in vegetarian menus.

Of course you will also find some tasty and surprising other recipes with chickpeas on surprising.recipes . Be sure to try these too:

Sesame paste (tahini) is the second basic component of hummus. And it is made from ground sesame seeds. In addition to hummus, it is also used as a stand-alone dip, or processed in for example baba ghanoush.

Here too, the traces go back 4000 years in time. Presumably sesame wine was offered to the Gods. So it must have been delicious at that time already! The historian Herodotus also describes the cultivation of sesame for 3500 years in the land of Tigris and Euphrates (Mesopotamia). It was then used for the oil.

Also further east, in India, China and Japan, sesame seed is widely used in the kitchen.

Of course you don't use a full jar of sesame paste in your hummus. So the question is what can you do with the leftovers. You will definitely find inspiration below: