Recently I read about an IBM Watson recipe "African style tiramisu with blue cheese". I didn't find this recipe, but I started reflecting about this combination. I had blue cheese and bacon at home, and decided to make my own "Watson style" waffle recipe: Belgian blue cheese bacon waffles. An intriguing but successful experiment. 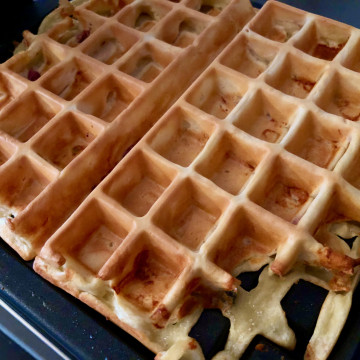 As mentioned in the beginning of the article, the inspiration for these Belgian blue cheese bacon waffles comes from a recipe created by IBM Watson: African style tiramisu with blue cheese. A Michelin star restaurant served this dessert created by the artificial intelligence of IBM Watson.

IBM developed the concept of cognitive cooking with the artificial intelligence of Watson. Based on an enormous database of recipes and specifications, Chef Watson will propose new and very surprising recipes. The system analyzed about 35,000 existing recipes and about 1,000 chemical flavor compounds, which allows it to make educated guesses about which ingredient combinations will delight and, just as importantly, surprise. From there, it tries to encourage unconventional combinations — like chocolate, coffee, and garlic — in order to produce dishes that have never been made before.

I am not kidding. There is even a cooking book with recipes from Chef Watson: Cognitive Cooking with Chef Watson: Recipes for Innovation from IBM & the Institute of Culinary Education

Read more about Chef Watson and cognitive cooking on the following pages:

Belgium is famous for delicious recipes. The backside is that they are not always very healthy. But who cares? Belgian beers, chocolate, fries and of course also waffles!

Belgian waffles are very big. They are also quite thick with deep square pockets, as you can see on the picture. A typical feature of a Belgian waffle iron is that you can turn it. Immediately after pouring in the dough you have to turn the iron. This ensures that the dough spreads evenly and also that they bake to the same degree on both sides. The use of yeast or baking powder makes them rise well. And this ensures that they are light and fluffy.

Belgian waffles became world famous after the worlds fair in Brussels in 1958. There they were showcased to the whole world. With toppings like whipped cream, chocolate, strawberries (from Hoogstraten), syrup, fruit or vanilla ice they became an instant success.

I don't list too many waffle recipes yet on surprising.recipes. But these recipes might be very interesting for you: