This Pangasius in tomato-saffron sauce is delicious and easy. My plan was to make a dish with fish and saffron, based on the fish availability in my local supermarket. As they were offering rebates on pangasius, I decided to use this catfish from South-East Asia. 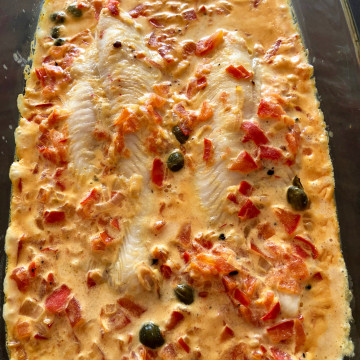 If you do not have saffron, you can also color the sauce with a little tomato paste, or even some turmeric. I think dark olives would also go very well with this dish. They give a nice Mediterranean touch.

Pangasius, or panga fish, has its origins in South East Asia, in the Vietnamese Mekong delta. It belongs to the species of the large catfish and lives in the fresh and brackish waters of the Mekong delta.

Pangasius is not the most popular fish in the world. This negative image gave birth to other names to market this catfish in different regions. In America and Australia you might buy it as "basa fish", "swai", or “bocourti”. In the UK you might buy as cobbler.

As mentioned before, the name tag pangasius creates a lot of emotions and concerns about quality and sustainability. But where do these come from, and what is truth and fiction?

The so called panga wars, or the catfish dispute, goes back to a trade war between the US and Vietnam in the beginning of this century. Cheap Vietnamese imports were flooding the US markets and harming the catfish growers in the United States. Protectionist measures tried to protect American farmers: American Pangasius first so to say.

With different claims and measures import was prohibited and/or a negative image was created. It had to be sold under the name Basa and the label “made in Vietnam”. Dumping allegations were raised and alleged environmental concerns about the conditions in which the fish was grown and the farmers had to work were put into the spotlights.

You may know the story that farmers raise pangasius in the dirty and polluted waters of the Mekong delta in Vietnam. Well, it is true that this is the natural habitat of this large catfish. However the farmers do not grow the fish in the river itself, but in separate waters outside the river. These meet the export standards for export in other regions. So different labels ensure that (European) standards with regards to labor, medicine usage and food are met European standards. But does this mean that there is no misuse? For sure not, but eating Pangasius is not per definition unhealthy and unethical.

More resources to inform yourself