These delicious banana canapés are an evergreen appetiser with a long history already. I first published them on gerechtenweb in my very first year of blogging. That was June 13, 2007! Ever since I make them on a regular basis for visitors and friends. Below the recipe you will find more guidance for making them. And we explain about the origin and the meaning of the word “canapé”. 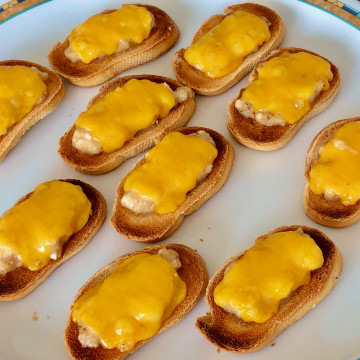 You can perfectly prepare the banana puree for these delicious banana canapés in advance. Keep in mind that the puree will turn brown due to oxidation with the air. It is therefore best to cover it with a plate or some cling film. Stir the banana puree well before spreading it on the baguette.

You can also toast the baguette in advance. So you only have to divide the banana puree over the toasted baguette and finish with a piece of cheddar. This is quite easy going. So there is no need to spend hours in the kitchen for finally making them.

In the early years I mostly used Chester cheese for these refined banana canapés. But in the meantime I have switched to cheddar. That's a personal preference. But you can use both perfectly.

But what are canapés exactly?

Most probably, when you hear the word canapé, you might think of a sofa. Something to sit in. Not of something to eat. But it is also the name for a piece of toasted bread that is finished with a snack.

As you can imagine, this word comes from French. And it actually comes from a French seating, so a divan or a sofa. There are different versions about the origin.

One is that a creative chef in France conjured up a dish on a toasted piece of bread. Where the ingredients are, as it were, in a seat on that piece of baguette.

Another version is that it was served as a snack while people are sitting in the sofa. Before they sit down to the table and wait for the main course. And the canapés were salted well also, so that the invites drink a lot. It can be part of a main course, as well as an independent starter or snack.

More Warming up with some surprising appetizers