Eggnog is a typical American sweetened dairy based beverage. You may also know it as a milk punch or an egg milk punch. It is typical for the period between Thanksgiving and Christmas. Roughly said a December drink thus. Variants and similar recipes are also known in the rest of the world. But the real eggnog consists of milk, eggs, sugar, cream and alcohol. Most often rum is used. But we made an easy eggnog with Baileys. And added a lot of Christmas spices like nutmeg, cloves and cinnamon. 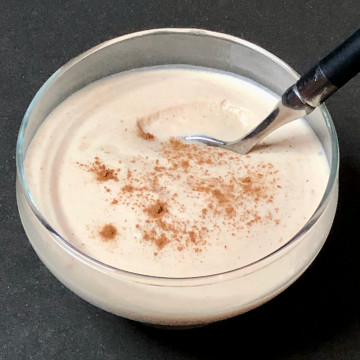 How to make easy eggnog with Baileys

This simple eggnog with Baileys is really super easy to make. And the sensational taste will be your surprise!

To begin with, we warm up the milk until just before cooking and add the sugar and vanilla sugar to it. The milk must not boil. Stir until the sugar has dissolved.

Meanwhile, we separate the white and yellow of the eggs. We set the white aside for later usage. And we beat the egg yolk manually or with the mixer until it is creamy. Then we add the milk and mix everything well. Stir for a few minutes under light heat. The milk must not come to a boil. Then also add the Baileys and the spices. Set the mixture aside and let it cool down.

When the base for the eggnog has cooled down, we whip up the heavy cream and the egg whites. Important: do this separately. Unfortunately I learned this by experience. Once I thought to be fast and beat both together, but that clearly didn’t work.

We now fold the whipped egg white and the whipped cream one by one under the eggnog mass. This is adding a lot of creaminess to the eggnog. Do this gently with a spatula. Then transfer the easy eggnog with Baileys into glasses and put them in the fridge for a few hours.

The preparation method is similar to lemon curd. In that case we bind butter with egg yolk. For eggnog we bind milk with egg yolk.

Alternatives for Baileys to use in the easy eggnog

Obviously, we used the famous Irish coffee liqueur for this easy eggnog with Baileys. Not at least because we have always Baileys available at home. Just in case we have the urgent need or wish to make a melting pot of chocolate and Baileys. But also because Baileys and milk go perfectly together.

But of course you can also use another alcohol, or leave it out completely if you are not in favor of it. Originally it was made with cognac, whiskey or the cheaper rum. You can read more about that later on.

Imagine you have some leftovers of this easy eggnog with Baileys. Add a spoonful of it in your coffee! Or how do you think about a “Latte eggnog macchiato”? Or pour some on your dessert ice with Bresilienne nuts… So delicious!

Eggnog, or egg milk punch is a cocktail based on milk and eggs. Other ingredients include heavy cream, sugar, spices and alcohol. Traditionally it was made with cognac or sherry in Europe. But with the crossing to America, rum came to the fore. But of course you can experiment with different types of alcohol. If you are not a fan, you can also omit the alcohol.

Knowing this, it is very similar to “advocado”, the famous Dutch "yellow sauce". And they are indeed close relatives. But still there is a difference. For advocado, only the egg yolk is used. Eggnog is much creamier, because of the usage of beaten egg whites and heavy cream.

What are the origins of eggnog?

When you think of Eggnog you probably immediately think of an Anglo-Saxon origin. And you are absolutely right with that. The first mentions go back to the 13th century. But it really became popular in the 17th century with the British aristocracy. As eggs, milk and sherry were not affordable for everyone at that time. Eggnog also made the crossing of the Atlantic during the colonization of America. Rum replaced the sherry as it was much cheaper. And so it quickly spread much further. Today eggnog is known as a typical American drink.

In America, eggnog is one of the classic dishes at Thanksgiving. This is the harvest festival that traditionally takes place on the fourth Sunday of November. For Americans, that's pretty much like Christmas in Europe. Turkey is usually on the main menu. Hence the association to Christmas. And with nutmeg and/or gingerbread spices, for example, you get a typical Christmas cocktail.

Eggnog can be eaten warm. In that case it is a bit of an alternative to mulled wine. But usually people serve it cold or lukewarm.

There is so much to tell and share about this delicious Christmas cocktail. This goes wide beyond our recipe for an easy eggnog with Baileys. But for sure you are interested to read more about it in the following articles: