Asparagus are the star of the menu starting from March until June. I especially like this Flemish asparagus. Of course because it is typical for the region where I come from. But also because it is so easy to make and has such a great taste. You will find many versions on the internet. Special about my version is that I separate the egg whites and the yolks. I like presenting them this way. 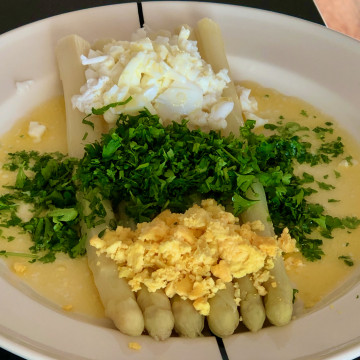 Flemish asparagus is one of the best-known culinary export products from Flanders and Belgium. They have more than a long tradition. As early as the Middle Ages, people in the Flemish region made this recipe. And already then just like the way we make them today: with hard-boiled eggs and parsley.

The surprising twist that we have built in here is the splitting of egg white and egg yolk. Because most people crush the hard-boiled egg as a whole. Here we choose to separate white and yellow first. And only then to crush both separately. I like the presentation this way.

Asparagus is native to Mesopotamia, Persia. That is the region where present-day Iraq and Iran are located. The country of Tigris and Eufrat. So the term derives from the Persian “sperega”, which means spear. In Greek that became “asparagos”, shooting up.

People soon discovered the healing power and especially the delicious taste of this vegetable, which is actually a lily-like. Already in Egyptian culture they were highly appreciated.

The best known are the white and green asparagus. But they also exist in purple form. However, that color that is not my favorite. The white ones grow underground and have not seen sunlight. Just like that other white gold from Belgium: chicory. The green ones and that other color are exposed to sunlight.

Medical powers were soon attributed to asparagus. Its shape alone made it known as an aphrodisiac for women, and a potency agent for men. Another special characteristic of asparagus is the smell of the urine that is produced afterwards. It is very remarkable because of the sulfur-containing substances. And that too was of course interpreted medically: it would remove harmful substances from the body.

And another fun fact: the longest asparagus ever measured is said to be 3.11 meters long. There you are with your average of 17 cm… You can visit it in a museum in Melderslo, in the Netherlands.

Do you want to know more about asparagus? Also read the following articles:

How to Grow Asparagus from Seed

Did you ever wonder where asparagus are coming from? How they grow and whether you can grow them at home? Well, it is all on the internet of course. During my research I found this great resource on Happydiyhome: how to grow asparagus from seed. It takes some time and you have to be patient, but be sure to read it and to try it if you want.

As I mentioned before, asparagus are the star of the menu during spring, from March until June somewhere. This also means that I collected a lot of recipes with asparagus meanwhile on surprising.recipes. Please also take a look at these creations: