This sky-scraping Waldorf salad is surprising and simple. The hardest part is building the tower itself, but you will notice that this is easier than you think. Our mayonnaise works like a good cement. But why is this called Waldorf salad? Does it have something to do with a town in Germany? Or with the well-known hotel chain? And what's the link with John Cleese? You can read more about it later in the article. 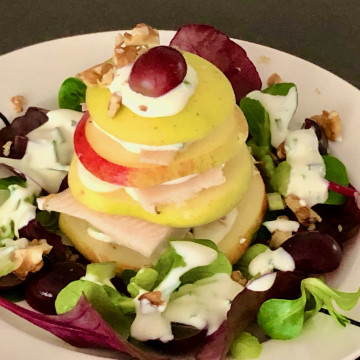 How to make this sky-scraping Waldorf salad

I got the inspiration to construct a Waldorf salad tower from Sophienaise, a Dutch blog. So I thought that was an interesting approach to present this classic salad in a surprising way.

For this starter I prefer to use a mixture of red and green apples. So you get a bit of a sweet and sour combination. This combination is also visually appealing, because the red skin is a bit more eye-catching.

This brings us straight to the first question: to peel or not to peel? I don't peel them because the peel has that little something extra. In addition, apples sometimes oxidize quickly, resulting in brown results. And that is no longer so appetizing. Of course I do rinse them to remove unwanted living and dead organisms on the skin as much as possible. Rinsed, not peeled. That's how a well-known secret agent would describe it.

Cut the apples into slices about 3 mm thick. Then remove the hard pieces from the core and stem. If you prepare the apples in advance, it is advisable to sprinkle the apple slices with lemon juice and seal them airtight. To avoid oxidation. You can cut the pieces that you do not use for the towers into small pieces and distribute them on the salad as a garnish at the bottom of the tower.

The apple and celery are both original ingredients for a Waldorf salad. In order not to jeopardise the stability of the tower too much, it is best that you cut the celery into very small pieces. This way you can distribute it evenly over the apple slices and you have a good base for the next building layer.

The walnuts and the red grapes

Component numbers three and four in a classic Waldorf salad are walnuts and grapes. In our version, we didn't include it in the tower. Rather, they are the toys in the lawn around our building. And you can also place them on the roof.

We halved the red grapes and chopped the walnuts roughly.

The last classic ingredient for a Waldorf salad is the mayonnaise. It is the binding agent between the different ingredients. In our version, the mayonnaise plays the role of cement, which should give the tower its stability.

Pure mayonnaise can be quite thick and greasy. That's why we made a lighter version with 50% yogurt. Slightly smoother, but also slightly lighter in taste. We have enhanced this with the fresh taste of finely chopped chives.

You might want to take an extra minute to make the mayonnaise yourself. Much better than the ones you buy in the store! You will make the best mayonnaise after reading "Mahonnaise - the origin of mayonnaise". And along the way you will learn about the origins of this delicious white sauce.

The salad is optional, but was also used as a base in the original recipe. Here we used a mixture of lamb’s lettuce and red mangold.

The smoked trout is not part of the original Waldorf salad recipe. It should come as no surprise that many different variants have emerged over the years. Common variations include smoked chicken or turkey and dried fruits such as raisins or cranberries. And ether are even versions where the celery is replaced by cauliflower.

But what exaclty is a Waldorf salad? And where does it come from?

"Dorf" does sound very German. It is indeed the German word for village. And there are several towns and cities in Germany that are called like that. The best known is perhaps Walldorf in Baden-Württemberg, south of Heidelberg. This is where the headquarters of the European software giant SAP is located. But, although they are good in programming software, they have nothing to do with this salad (The city is spelled with double ll by the way).

Then there's that luxury hotel chain: Waldorf-Astoria. Would that have anything to do with it? Yes Indeed! A Waldorf salad is named after the Waldorf-Astoria hotel in New York. On March 14, 1896, a charity ball was organized for a children's hospital. Chef Oscar Tschirky created the salad (then still without nuts) for this occasion. That same year, the recipe already appeared in the cookbook “The Cook Book” by “Oscar of the Waldorf”. In 1928 a new version (with nuts) appeared in The Rector cook book.

Meanwhile, this is of course a worldwide classic in the kitchen. And as it goes, there are also many variations. Smoked chicken or turkey is often used in it. Also dried fruits like raisins or cranberries often appear in a Waldorf salad. Sometimes the salad is also freshened up with the best of orange or lemon. Yogurt and even peanut butter often give their own accent to the mayonnaise. There are even versions where cauliflower replaces the celery.

This sky-scraping Waldorf salad also honors the hotel chain that created it. The Waldorf-Astoria hotel in New York is also sky-scraping with its 47 floors.

What is the link between a sky-scraping Waldorf salad and John Cleese?

Do you know Fawlty Towers? A British comedy series starring John Cleese as the hyper-nervous hotel owner who successfully devils his customers. Still the best comedy series ever for me. It always puts a nice smile on my face after a bad day.

In one of the episodes, he has American guests who order a Waldorf salad. Without a cook, he has to take care of the kitchen himself. Not knowing what a Waldorf salad is, he comes up with the legendary statement: “I am sorry, but I think we have run out of Waldorf”. If you don't know the ingredients for a Waldorf salad yet, you will know them by the end of the episode: apples, celery, walnuts and grapes in a mayonnaise sauce.

And again we have a link with “Towers”. With so many tower associations, the sky scraping tower has to be the best way of serving it.

You may find more interesting and surprising starter ideas in the following articles: