On the 17th of March all the Irish people celebrate Saint Patrick’s Day. He is the cultural and religious patron of Ireland. Not only in Ireland, but all over the World Irish people celebrate with food, folklore, parades and anything green, even beer. Why not start this day with Guinness pretzel truffles? Made with more… 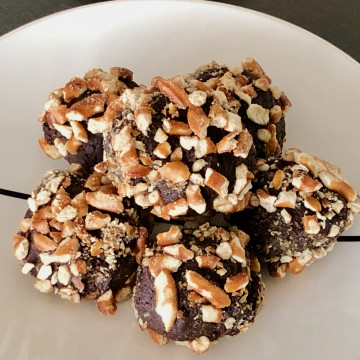 The reduced Guinness acts as a great flavor enhancer. The chocolate on the contrary provides the sweetener to these truffles. Normally I use chocolate with 70% cocoa. If you go higher with the cocoa percentage you should definitely add extra sugar. Otherwise the truffles might become too bitter. Pretzels are also available in different types, with sweet and salty varieties. I like to use the salty ones, to add a salty component. The result will be a unique combination of malty, bitter, sweet and salty! They'll run out before you know it! And at best you drink Guinness with it!

Surprising recipes is the motto of this blog. When I saw this recipe with the unusal combination of Guinness and pretzels, I had to try this of course!  I found the inspiration for this Guinness pretzel truffles on an Irish blog (of course), as a sweetie for St. Patrick's day.

Pretzels, Brezel in German, originate from the south of Germany (Bavaria) and Austria. There you will find them in every bakery and stall as a simple to-go meal. Usually they are sprinkled with salt grains. In the Roman times they were eaten in the monasteries on festive events . Typical of pretzels are their characteristic shape, in a knot. The dough is rolled out after kneading and placed in a knot shape. Then they are boiled in water with baking powder and sugar for a few minutes. After that they are coated with egg white, sprinkled with salt and go into the oven to bake. They are often also eaten with a large beer and preferably with white sausage from Bavaria. Today the world also knows them as a small salty snack.

I haven't baked any pretzels yet. But of course you can make them yourselves:

Whoever says Saint Patrick's Day, says Ireland and the inevitable Guinness with the harp and the shamrock clover leaf. This public holiday falls on March 17 and is Ireland's national holiday. But also outside of Ireland a lot of celebrations take place, including for example a large parade in New York. Wherever the Irish are, there is also Saint Patrick's Day.

Saint Patrick is the patron saint of Ireland and his death is commemorated on 17 March (461 AD). He supposedly brought Christianity to Ireland. And his death has been an official holiday since the 17th century.

The color of Saint Patrick's Day is green. Many people will therefore participate dressed in green to the festivities. This green color comes from the shamrock with which Saint Patrick interpreted the Holy Trinity. A good café owner will certainly tap the foam of his Guinness in clover shape on that day. Fountains are colored green and you can even drink green beer in some places. And of course eat these delicious Guinness pretzel truffles!

Guinness is one of Ireland's most important, if not the most important, export products. The St. James brewery was founded in 1759 by Arthur Guinness in Dublin. He had some revolutionary ideas. He signed in 1759(!) a contract to rent the abandoned brewery in Dublin for 9000(!) years! And that for the price of, hold on, £45 per week! No wonder they still brew at the same place. In addition, or precisely because of that, he paid his staff very well and gave various social benefits, which was not usual at the time. In the 1930s, nearly one in ten people in Dublin depended directly or indirectly on the brewery.

Still, things did not always go well for the brewery. In the 1970s, everyone thought that the last Guinness had almost been brewed. Taste adjustments and a relaunch of the brand brought the brewery back to live. I personally know Guinness because of the marketing campaigns. Examples, "Guinness is good for you" and "Made of more". Combined with the Irish harp as a logo and the unique black and beer with foam, the combine to a very strong image. And not to forget, I just love the beer and I ran my best marathon in Dublin. I am still convinced that the Guinness the night before helped me a lot with that.

Did you know that the Guinness book of records actually comes from the brewery? Also a clever a marketing move from 1954. A book with redundant records should give the people some stuff to talk about in the pub. I guess no-one back then imagined that this would become the best selling book ever in the world…