Königsberger Klopse with Spätzle, or German meatballs with German pasta. Typical German, you would probably think. And both are, to a certain extend… You can learn more about “this certain extend” further in the article below the recipe card.

I originally published this recipe for the first time on gerechtenweb.blog for the first time in 2014. Now in 2021 it is time for an update with new pictures, recipe card and some more background about the origins of Königsberger Klopse and Spätzle. 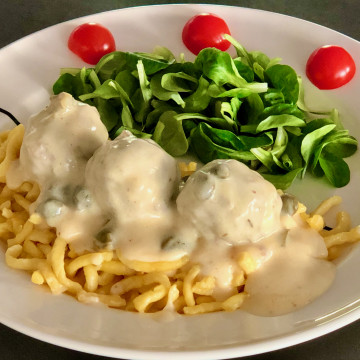 When you read about Königsberger Klopse, you probably immediately assume this must be a German recipe. And that's true, but only to a certain extend. If you search for Königsberg in Germany on Maps, you might indeed find an area at a good 100km northwest of Berlin, in Brandenburg. But these Klopse don't come from there. The current name of the original Königsberg, where these meatballs come from is Kalinigrad. Indeed, the Russian enclave between Poland and Lithuania. Königsberg / Kalinigrad was long the capital of East Prussia and was part of the German Empire from the 1870s. But a few world wars later, Germany looks completely different. And Russia has kept this strategically located city on the Baltic for itself.

This East Prussian specialty consists of meatballs in a white sauce with capers. The balls consist of minced meat, onion, white bread crumbs, egg and herbs. Traditionally, you cook the meatballs. Alternatively, you can also bake them if you want. You can make a white sauce with the cooking liquid or with beef stock. And traditionally you serve them with cooked potatoes. Unlike me in this recipe. I decided to serve them with Spätzle, a regional product of the South of Germany. The first cookbook that mentions Königsberger Klopse is "Praktisches Kochbuch für die bürgerliche und feine Küche", from 1825.

Spätzle is a German pasta. And this time also from Germany as we know it today. They originate from the region of Swabia in the south of Germany. The dough is pressed directly into boiling water during the production process. As a result, the shape is also irregular and rougher. This rough shape has the advantage that the sauce sticks well to it. You don't need to knead the dough, just mix the ingredients. No other pasta is may this way. This makes it softer and more moist. Spätzle is actually a diminutive, meaning small nuggets. In Switserland they are known as Knöpfli. One of the first mentions of Spätzle in a cookbook is in 1781, in the Göppinger Kochbuch. Since 2012, “Swabian Spätzle” are registered in Europe as a recognized regional product.

You can make Spätzle very easy by yourself. Please read the article Käsespätzle with caramelized onions for all instructions. For that recipe we made the dough from scratch.

Germany may not be known as the most culinary country in the world. But stereotypes can be broken. Also in Germany you can have delicious local meals and recipes. And as I live in Germany, some made it also to surprising.recipes: