This penne with tomato vodka sauce is a typical healthy midweek recipe. It is vegetarian, does not take long to prepare and very healthy. Preparing the tomato sauce is het biggest job. But even there you can still take some shortcuts. We will explain that later on. But we start with sharing the recipe card. 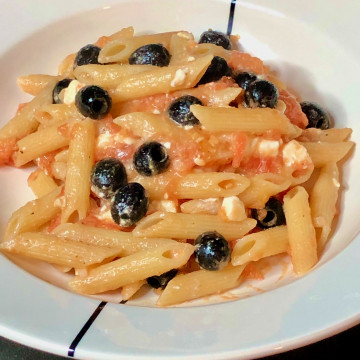 Preparing the other ingredients

Combining the penne with the tomato sauce

How to prepare this penne with tomato vodka sauce?

As mentioned in the introduction, this penne in a tomato vodka sauce is a straightforward healthy vegetarian midweek meal. And you even have a shortcut for the biggest amount of work: preparing the tomatoes. Still this is a typical Italian cuisine style recipe: an easy and tasty dish with only a handful of healthy and delicious ingredients.

Actually, we only have to prepare the garlic and the tomatoes. And the feta, if you decide not to crumble it. We first crush the garlic cloves with a knife. Then they can be easily freed from the skin. After that we chop them finely. Or you can use the garlic press.

If you don't crumble the feta cheese, you may cut it into small pieces.

Before we process the tomatoes, we already put on a pot of water and bring it to the boil. Meanwhile, we make a cross-wise incision in the tomatoes. When the water boils, the tomatoes go into the boiling water for a minute. If you notice that the skin is coming off, you can take them out of the warm bath again.

Do not pour away the water! We can immediately reuse it to cook the penne "al dente". Look for the indicated cooking time on the packaging. Since the penne goes into the pan for a while afterwards, it can really be al dente. So not completely cooked yet, but just slightly before.

While the penne is cooking, we can continue working with the tomatoes. We skin them first and then quarter them. Then we remove the seeds and the hard part of the stem. Finally, we finely chop the tomato flesh. Do not throw away the tomato seeds and skin. They form a perfect basis for a soup, for example with the cooking water of the penne.

Are you short on time? Or not the patience and energy to prepare the tomatoes? No problem. Then take a 400 gram can of tomato pulp and use that. That's a shortcut, and then you really have your quick midweek meal.

Bringing the penne with tomato vodka sauce together

So, now we are well on track and can go into the final steps. For that, take a pan and heat two tablespoons of olive oil in it and let half of the tomatoes reduce for about ten minutes. Season with salt and pepper. Or other Italian herbs to taste. The tomato structure will now disappear and they will really be reduced to a sauce. Once we're ready, we'll set the sauce aside.

Again we heat two tablespoons of olive oil in the same pan. We first fry the garlic in it until it turns nice and brown and the smell of it takes over the kitchen. Then we add the remaining tomatoes to it. After about two minutes it is time for the black olives and vodka. This must then reduce for a while so that the alcohol evaporates and the sauce boils down again. We want an Italian sauce with little moisture and a lot of flavor. Which also sticks nicely to the penne. So really Italian, and not like in other regions, where the pasta often drowns in lots of sauce.

Once the sauce has thickened, we can add the penne, feta and the previously made tomato sauce. Mix everything well and let all the ingredients get warm. Then the ingredients can be placed in deep pasta plates to be served immediately. You can give it a few more turns with the pepper mill if you like.

As mentioned, you can take a shortcut for the tomatoes by using a 400 gram can of tomatoes. There, too, you can reduce half of it in advance to a tasty tomato sauce, and process the other half with the olives and vodka.

By adding the feta to the pan, it will naturally heat up and melt partially. This gives the sauce something creamy. However, you may not like that. No problem, then you wait with the feta until you have served the pasta on the plates. Then sprinkle them with the cubes of feta cheese.

Everything you always wanted to know about vodka

Most of you will know that vodka is distilled from potatoes. This is partially true. In fact it is a mixture of fermented cereal grains and potatoes. And it has its origins in the Slavic and Nordic European countries.

But there are two countries really claiming the origins of vodka. And these are Poland and Russia. the debate in itself may already be explosive.

And did you notice that I wrote Polish wodka with "w"? That is also a remarkable difference: Polish wodka is written with a "w". Russian vodka on the contrary with a "v". In Dutch for example, we also write wodka, like the Polish version.

And maybe I can spend here also some words about the origins of the recipe. Basically I found it in a cookbook with recipes that only need 6 ingredients. But I was not convinced of the version in the cookbook. They added half a liter (!) of vodka to the sauce. I am not sure about that... First of all this adds seriously to the cost of the recipe. And it takes of course much longer for the alcohol to evaporate and the sauce to reduce. And then the tomatoes are really pulped. So I guess this must be an error. I only took 1 dl of vodka, and I think this is more than enough.