This melting pot of chocolate and Baileys is not just a chocolate mold. Oh yes, these are the more than well-known lava cakes with chocolate, but more than decent portion of baileys makes them taste like heaven. 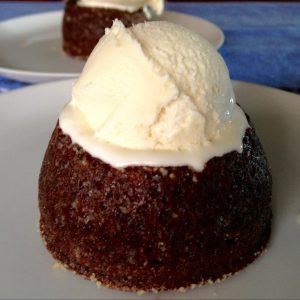 Melting pot of chocolate and Baileys

Instead of almond powder I regularly also use hazelnut powder or even coconut rasp.

More tips for the perfect melting pot of chocolate and Baileys

Instead of almond powder I also use a hazelnut powder or coconut rasp as an alternative. Or I make a mixture of them. Certainly the coconut rasp gives the lava cakes a completely different taste!

As for chocolate, you should take those really dark bars, with more than 75% cocoa. There is already a more than fair amount of sugar in the dough and with milk chocolate you will not realize the same effect.

What I haven't tried yet, but definitely want to do again, is to add some spicy touch. Some chili flakes or something like that. Just as is sometimes done with pralines.

You can also make this dessert a few days in advance and keep it cool. It is of course a big advantage that you only have to put the ramekins in the hot oven on the day itself. No stress when your guests are there!

The aim is for the lava cakes to be firm on the outside, but still soft and liquid on the inside. Therefore, you have to bake them at a very high temperature in the oven. The outside will crust then quickly, whilst the inside is still fluid. When they start to burst at the top they are perfect and you can take your melting pot of chocolate and baileys out of the oven.

I prefer to finish these lava cakes with a scoop of ice cream on top. Every now and then this fails and falls through the cake. No problem at all, because in the end it has to be that flavor combination. I prefer vanilla ice cream. That fits the taste perfectly. For me, chocolate ice cream would result in an over dose. But that is of course up to you.

I also like to garnish the whole with some red fruits. They represent the healthy side of this calorie bomb 😉 Raspberries are my favorite, because the more sour taste goes well with the sweet chocolate with baileys.

This dessert is also suitable for gluten-free diets. There is no gluten in baileys. And almond powder is known as a gluten-free alternative to flour.

One of the stars of this melting pot of chocolate and baileys is Baileys! Of course you can use the classic version. But you may also try one of the special flavors. Such as there are (salted) caramel, coffee or hazelnut. Amongst others. Feel free to share you favorite coffee liqueur for this heavenly lava cake!

Which jars do you use best to bake this melting pot of chocolate and baileys in the oven? Well, I prefer to use 90cc ramekins. I used to buy them at AVEVE, a Belgian group, but they don't have a branch in Berlin.

Nowadays you can buy anything online. So here are some online shops:

Don't have heatproof jars, or don't want to buy them? Alternatively, you can also use a ring. Jeroen Meus, a Belgian television, cook, does this for his lava cake, for example. Although they are short of Baileys. You have to grease the rings on the inside and cover them with almond flour. Just like you do with the jars. But without bottom, the dough has to stiffen a bit more, to prevent leaking. A small advantage of using rings is that you don’t have to turn your cakes upside down.

The history behind this melting pot of chocolate and Baileys

The original idea for this melting pot of chocolate and baileys originates from a team event with colleagues sometime before 2005. There we had to cook our menu together, and a similar lava cake was dessert.

I then started making it myself, and it was an instant hit in the family. As mentioned before, there have been tears when I dared to make something different. In 2007 I started blogging, on Apple's iWeb at the time. And evidently, this was one of my first early publishings. In 2012 I migrated it to WordPress when I started gerechtenweb.blog and surprising.recipes.

Over the years I made some smaller adjustments to the article. But now, 2021 it was time for a complete restyling with new photos, more text and of course a recipe card.

I know there are people that don’t want me to make anything different. But nevertheless here are some more surprising dessert inspirations: